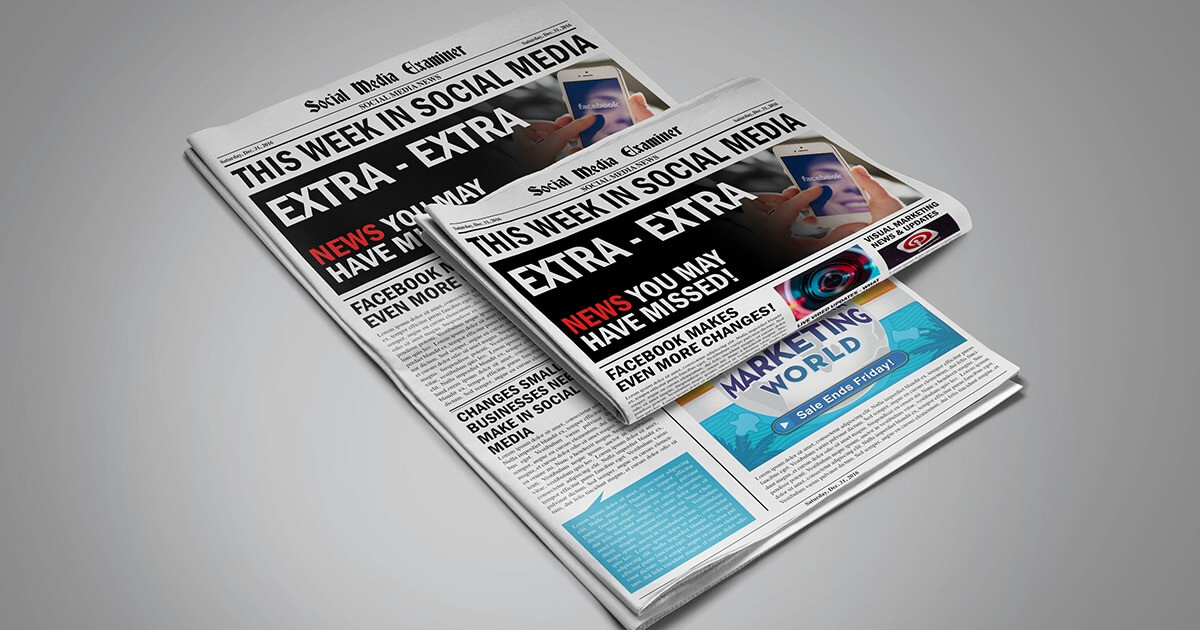 Periscope Rolls Out Support for Live 360 Video: Periscope launched its own Live 360 video experience this week. The new Live 360 broadcasts are marked with a badge and enable viewers to change their point of view “by moving [their] phone or tapping and scrolling around the screen – all while watching live.” Although anyone on Twitter or Periscope can watch the videos in 360 degrees, the Twitter-owned live-streaming platform is currently testing the ability to stream in this new format with “a small group of partners.” Periscope plans to roll out Live 360 more broadly in “the coming weeks.” Those who are interested in being notified when the ability to broadcast in Live 360 becomes more widely available can apply to join a waitlist to be contacted via email.

Periscope is testing Live 360 video with select partners and will roll out this feature more broadly in the coming weeks.

Twitter Adds New Stickers and Hashtag-triggered Emojis for the New Year: To ring in the New Year, Twitter released a new set of celebratory stickers and hashtag-triggered emojis to all users. The hashtag #HappyNewYear will automatically add a fireworks emoji to tweets. The new stickers showcase different sights from around the world and the year 2017.

Snapchat Launches New Native Games Feature: TechCrunch reports that “new Selfie Lens filter games are starting to appear to users, creating an addicting new Snapchat feature that also inspires competition between friends and could become a powerful ad revenue driver.” The new native games feature in Snapchat is embedded in one of the first Lenses shown this past week. Users can find it by opening the camera, holding on your face to scan it, and then choosing the “Santa’s Helper Lens” as one of the filter options.

The Morning Social Media Marketing Talk Show with Michael Stelzner is taking a break for the holidays and will return on Friday, January 6, 2017. Subscribe to future shows here.

8th Annual Top Social Media Blog Contest Call for Nominations: Social Media Examiner is now accepting nominations from the public for their favorite social media blog of the year. Judges for this year’s contest, Heidi Cohen, Marcus Sheridan, and Sonia Simone, will select the winning blogs based on the quality of content, frequency of posts, reader involvement, and ranking.

Customer Satisfaction Research Study: In October 2016, MarketingSherpa conducted research into customer satisfaction based on a survey of 2,400 customers. The set was divided into two groups. One was asked 50 questions about the business, marketing, and channel practices that make them highly satisfied with a company. The second group was asked similar questions about what makes them highly unsatisfied. The results provide insights into the practices that business, marketing, and channel leaders should utilize and avoid, the most trusted advertising channels, and the top reasons customers unsubscribe from emails, block online ads, and delete apps.

How Consumers Want to Receive Retail Brand Communications: Recent research from customer experience platform provider Bluecore and NAPCO Research shows that most consumers (68%) across all age demographics prefer to receive brand and retailer communications via email. According to the study, email is “the most preferred and most personal way consumers of all demographics engage with their favorite brands.” More than half (53%) say their smartphone is “the primary device on which they check email, which increases with younger audiences, 67% of Generation Z and 59% of Millennials.” While 36% of survey respondents say that they generally don’t rely on social media to learn about new products from brands, Facebook (23%) and YouTube (14%) remain the strongest platforms for reaching consumers across all demographics. These findings are based on a July 2016 online survey of 1,174 U.S. consumers who had made an online purchase within the past three months.

Benchmarking Study Q3 2016: Quintly analyzed over 220,000 social media profiles of various sizes on Facebook, Twitter, and Instagram between July and September 2016 to determine how marketers are using each of these channels. The findings suggest that Instagram accounts are growing more rapidly than accounts on the more established sites, Twitter and Facebook. The report also shows that “smaller” profiles on Instagram with 100,000 followers or fewer achieved the highest growth rate of over 10% month to month during this study.

Leading Video Ad Targeting Methods: A new study from Videology and Advertiser Perceptions examined which video ad targeting methods are most popular among brands and agencies. The report reveals that demographic- and behavioral-based targeting is the most frequently used in digital video ad campaigns. Contextual-based targeting (such as sports and financial) is also regularly used by a majority (55%) of agencies. Meanwhile, brand marketers are more likely to use sales-based targeting (46%). These findings are based on a survey of more than 300 brand marketers and agency contacts from the Advertiser Perceptions media decision-maker database and third-party databases.

Instagram and Snapchat Ads Study: Earlier this year, Adweek commissioned Survata to survey 511 Instagram and Snapchat users between the ages of 13 and 34 on their sentiment toward each app and their impression of the ads on each platform. The findings reveal that only 26% of respondents recall seeing specific Snapchat ads and only 37% recall seeing specific Instagram ads. While both platforms are favorable among younger audiences, Snapchat is perceived as being “cooler” and having the “best features” according to 64% and 67% of those surveyed, respectively.

Worldwide Mobile Phone Messaging App Usage: eMarketer’s new forecast shows that more than one-quarter of the world’s population will be using mobile messaging apps by 2019. This prediction is based on their current growth in usage and market penetration to more than 1.4 billion people in 2016, a 16% increase from the previous year. The largest markets for chat apps are the Asia-Pacific region, which is home to more than 50% of all chat app users worldwide and more than 805 million consumers, and India where chat app users are expected to grow by more than 24% this year to top 133 million. According to eMarketer, “the expansion of messaging apps into platforms that include chat bots and editorial content is providing marketers with more natural places to engage messaging app users.”

What do you think of Live 360 video on Periscope and Twitter? Have you checked out the new stickers and emojis on Twitter? Please share your comments below.