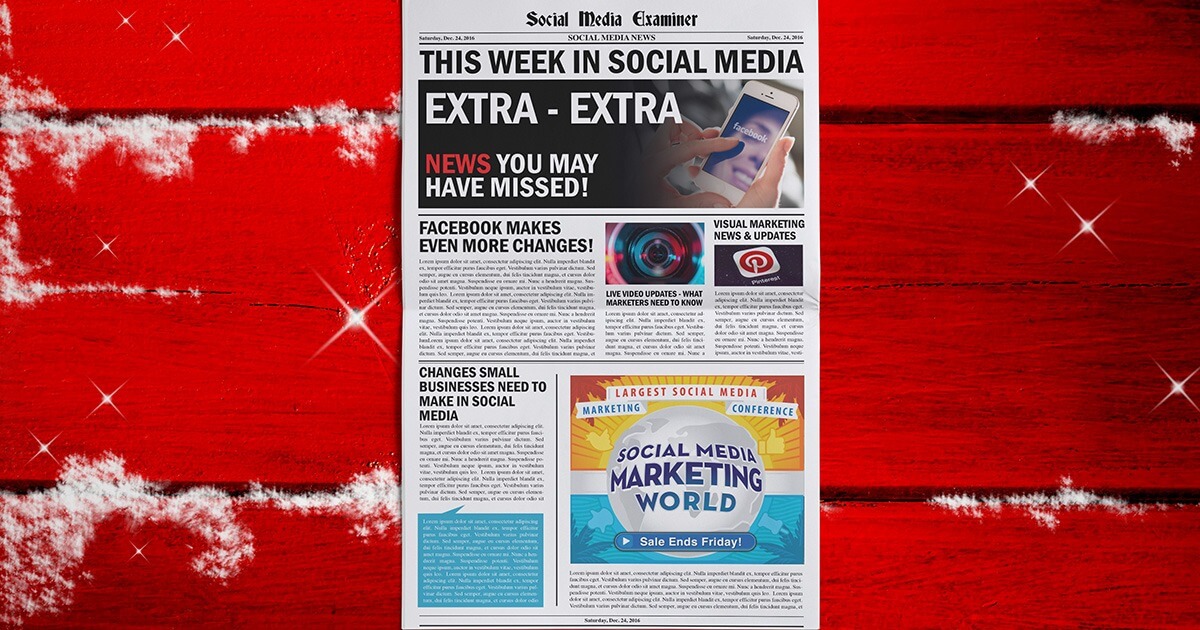 Facebook Messenger rolled out a new Group Video Chat feature on Android, iOS, and the web.

Instagram Adds Customizable Stickers to Stories: Instagram introduced “a set of tools to help you add context and creativity to your story: stickers, holiday fun and more.” Once users take a photo or video on Instagram, a new sticker button will appear alongside the text and drawing tools. With a tap, a selection of customizable stickers for the weather, current time, location, and the holidays pops up and can be added to your image or videos. The new customizable stickers are available to all users as part of Instagram version 10.3 for both iOS and Android. 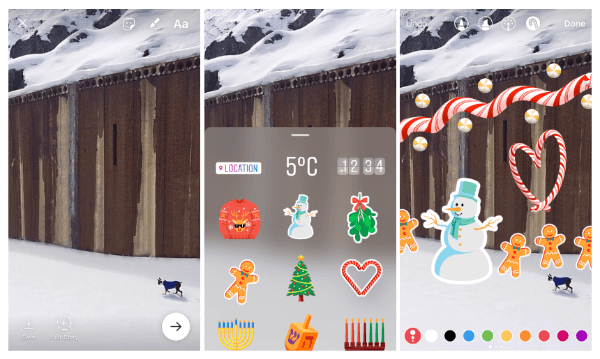 8th Annual Top Social Media Blog Contest Call for Nominations: Social Media Examiner is now accepting nominations from the public for their favorite social media blog of the year. Judges for this year’s contest, Heidi Cohen, Marcus Sheridan, and Sonia Simone, will select the winning blogs based on the quality of content, frequency of posts, reader involvement, and ranking.

The Morning Social Media Marketing Talk Show with Michael Stelzner is taking a break for the holidays and will return on Friday, January 6, 2017. Subscribe to future shows here.

Facebook Introduces Live Audio: Facebook introduced “another way to go live on Facebook” with Live Audio. This new format allows publishers that “want to tell a story on Facebook with words and not video” to go live with audio only. Live Audio also provides broadcasters with another option for “connecting with audiences in real time” from areas with low connectivity. Just like with Live Video on Facebook, listeners can “discover live audio content in News Feed, ask questions and leave reactions in real time during the broadcast and easily share with their friends.”

Facebook is currently testing Live Audio with a select number of partners such as BBC World Service, LBC, Harper Collins, and authors Adam Grant and Britt Bennett. The network plans to make Live Audio “more broadly available to publishers and people” by earlier next year. 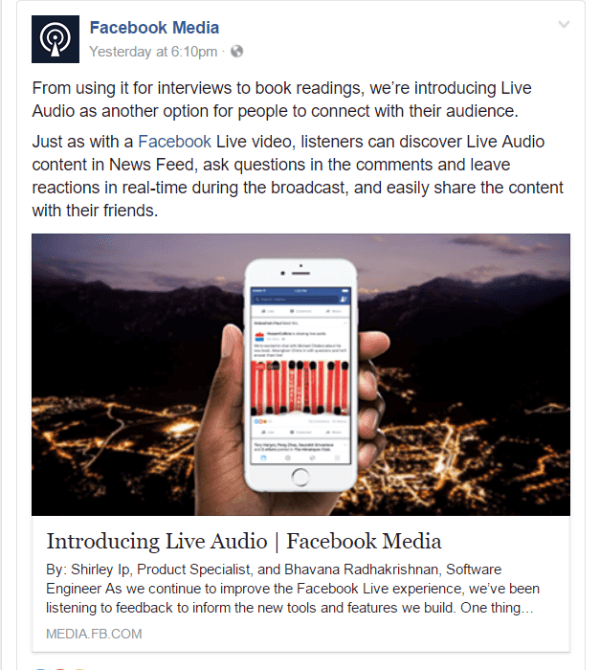 Twitter Fixes Reporting Error for Video Ad Metrics: Business Insider reports that “a bug in a recent version of Twitter’s Android app inflated video advertising metrics by as much as 35%.” Twitter proactively informed affected partners of the discrepancy, fixed the error, and issued refunds for overbilling on video ad campaigns that ran between November 7 and December 12. “Given this was a technical error, not a policy or definition issue,” Twitter states that it’s “confident that [the issue] has been resolved” and will continue to monitor its systems for any future errors.

Facebook Live Updates Mentions App: Facebook Mentions app, which enables public figures like athletes, musicians, journalists, politicians, and others to easily connect with their audience on Facebook, is adding several new live broadcasting features including live video drafts and reminders, comment moderation tools, replay trimming, and other adjustment tools. These new features are rolling out “in the coming weeks” and will be available to all Mentions users. 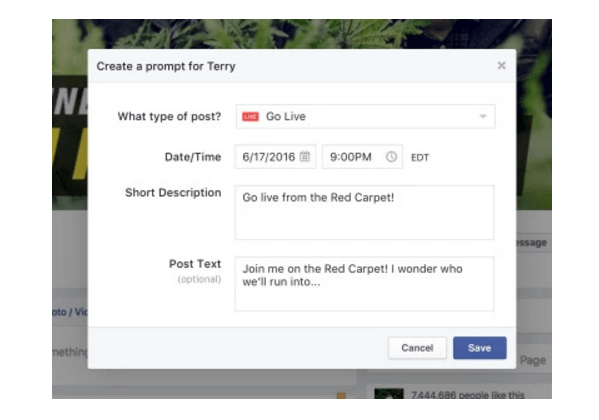 Facebook Rolls Out Colored Backgrounds on Text Status Updates: Facebook rolled out a new feature that “lets users select a color that appears behind their text status in place of the normally-white background.” There are several options for colors including some with “an Instagram logo-style color gradient” for a “more stylish and modern” look for your Facebook updates. TechCrunch reports that colored status backgrounds are “rolling out globally over the next few days.” Currently, only Android users will be able to create them, but all iOS, Android, and web users will be able to see them in the news feed.

Twitter Ranks Top Tweets Search Results by Relevance: Twitter has started ranking top tweet search results by relevance rather than in reverse chronological order. Twitter has been working on this adjustment “over the last few months” and has run “several experiments” with ranking algorithms, layout, the right number of out-of-order tweets to show, and the order of relevance. Twitter discovered that “people who have experienced this new Search results page tend to not only engage more with the Search results but also Tweet more and spend more time on Twitter” and the platform will continue running more “relevance-based experimentations and improvements… in the future.”

Facebook Releases Guide for Page Moderation and Management: Facebook Business published a quick guide for page owners and admins that “includes tips… on how to report, block and prevent abusive activity, respond and manage comments and moderate and post important content.” In this resource, Facebook provides an overview of the tools and features currently available for page managers and offers advice on how to best manage your business page interactions and presence on Facebook. 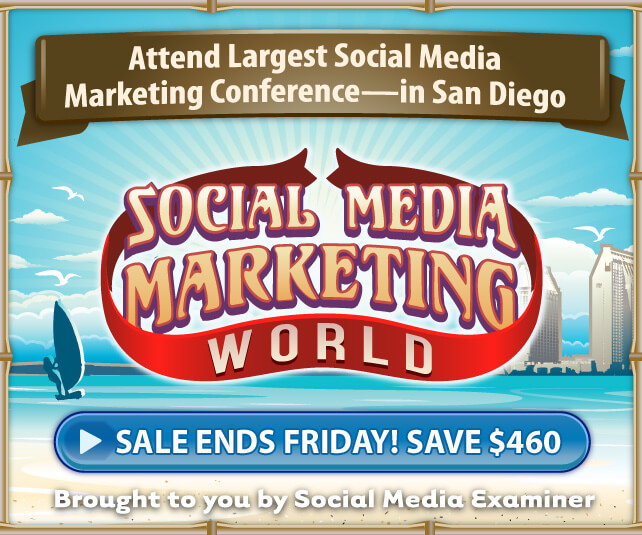 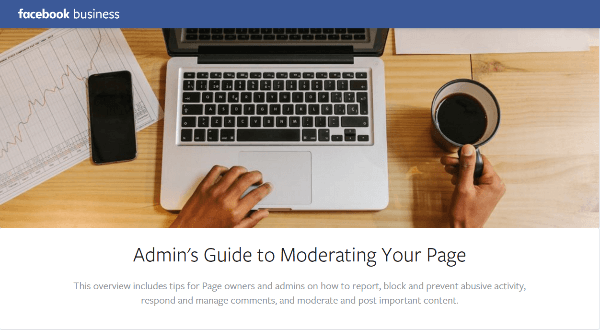 Facebook Business published a guide with tips on how to report, block, and prevent abusive activity; respond to and manage comments; and share important content on your page.

Facebook Launches Messages From Facebook: Facebook launched a new marketing program called Messages from Facebook that invites people “to share and talk about events and moments that are happening in their communities and around the world.” These shareable messages now appear as large, colorful cards at the top of the news feed and highlight a specific event or moment. This new feature gives people ways to connect and share with friends during holidays and events, discover fun and interesting cultural moments, and celebrate notable moments in history. TechCrunch reports that this new feature is “a brand and marketing initiative” for Facebook only, and at this time “advertisers cannot sponsor these messages.” 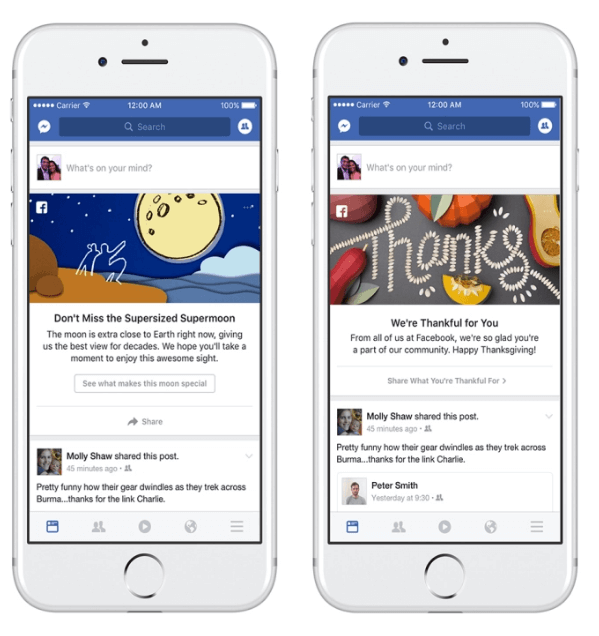 Facebook introduced a new marketing program to invite people to share and talk about events and moments that are happening in their communities and around the world.

Facebook Removes Nearby Friends and Tests New Wave Feature: TechCrunch reports that “Facebook has removed the precise location-sharing feature from Nearby Friends,” which allowed select friends to temporarily or permanently see your exact location on a map. While a useful tool for meeting up with one another, the feature has been replaced with “a list of people’s proximities and neighborhood.” Facebook is currently testing the ability to see which friends are near you and tap a button to spontaneously arrange a meetup through messaging.

Facebook is also testing a new successor to the Facebook Poke within Nearby Friends that allows users “to send their friends a waving hand emoji to say hello and help them meet up.” TechCrunch reports that the “wave” is meant to give people “more ways to express themselves and help friends interact with one another in new fun and lightweight ways.”

Vine Will Transition App to Pared-down Vine Camera: In late October, Vine announced plans to discontinue the app “over the coming months” and promised to notify users through the app when things start to change. This week, Vine shared its plans to transition the Vine app to a pared-down Vine Camera in January 2017. The Vine Camera app will allow users to continue making six-second looping videos that they can either post directly to Twitter or save to their phones. Vine also announced that “in the coming days,” it will roll out “a way to make it easy for your Vine followers to follow you on Twitter” with a new “Follow on Twitter” notification. In the meantime, users can now download and save their Vines through the app or the website and can continue viewing them on the vine.co website.

Facebook Messenger Tests Group Calling on Desktop: Group calling was widely rolled out on the Messenger mobile app earlier this year. Facebook is now “working out the kinks to bring the feature to your home and office” by giving a small number of desktop users the ability to test group audio calls in Messenger. TechCrunch reports that “those with access will now see a phone icon on their group chats that they can hit to instantly invite the members to join the call.”

Facebook Previews Personal AI System: In a series of video posts on his public page, Mark Zuckerberg debuted a new personal AI system called Jarvis using Facebook tools. In a Facebook Note, the Facebook founder “explains what [he] built and what [he] learned along the way” and offers a glimpse into how natural language prompts, vision and facial recognition, and other Facebook technology like Messenger were integrated into this project. An article in Fast Company reports that AI technology is “essential to Facebook’s future” and provides an exclusive look at the development, capabilities, and future of Jarvis. 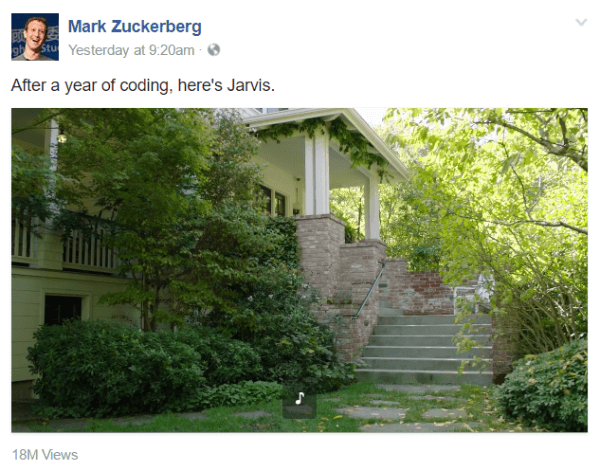 Nielsen Digital Ad Ratings U.S. Benchmarks 2Q 2016: According to a new Q2 2016 report from Nielsen, digital ad campaigns reached their intended audiences 60% of the time on both mobile and desktop. The study also indicates that it’s “highly unlikely” that campaigns will ever achieve 100% on-target percentage due to consumer behaviors such as misrepresenting age or gender online, sharing digital devices among family and friends, and limitations with cookie-based targeting. The findings also suggest that ads seen on desktops perform better for broadly targeted campaigns and reaching male audiences. Meanwhile, mobile ads are stronger when it comes to reaching narrower targets and female audiences. The report also examines reach and impressions by industry and age groups.

#YouTubeRewind 2016: YouTube shared its annual year-end rankings for the top videos, music videos, and ads shared on its platform in 2016. The top 10 video rankings were based on a variety of factors such as “time spent watching, sharing, commenting, liking and more.” The platform also shared the 2016 Year-End YouTube Ads Leaderboard, its “annual look at the most watched and engaging ads of the year globally.” The results show that “mobile proved to be a key platform for [ad] viewers again this year. In fact, across the five Super Bowl ads on [YouTube’s] Year-End Leaderboard, 81% of watch time came from mobile devices, with over 205 million combined mobile views.”

USC Annenberg Relevance Report: The USC Center for Public Relations released a new report in partnership with Humana, Meltwater, and Golin on the “topics and trends that will impact society, business and communications in the coming year.” The report features a collection of essays from “communication leaders and academic experts on the issues, ideas and innovations that will shape the communications industry in 2017.” The report covers “a broad range of topics grouped into the following five categories: media, communications, technology, brand and people.” 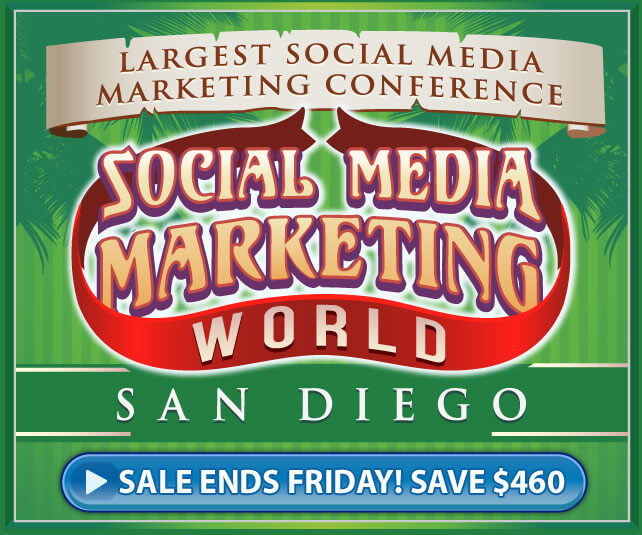 What do you think of the Group Video Chat feature on Messenger? Have you tried Instagram stickers? Please share your comments below. 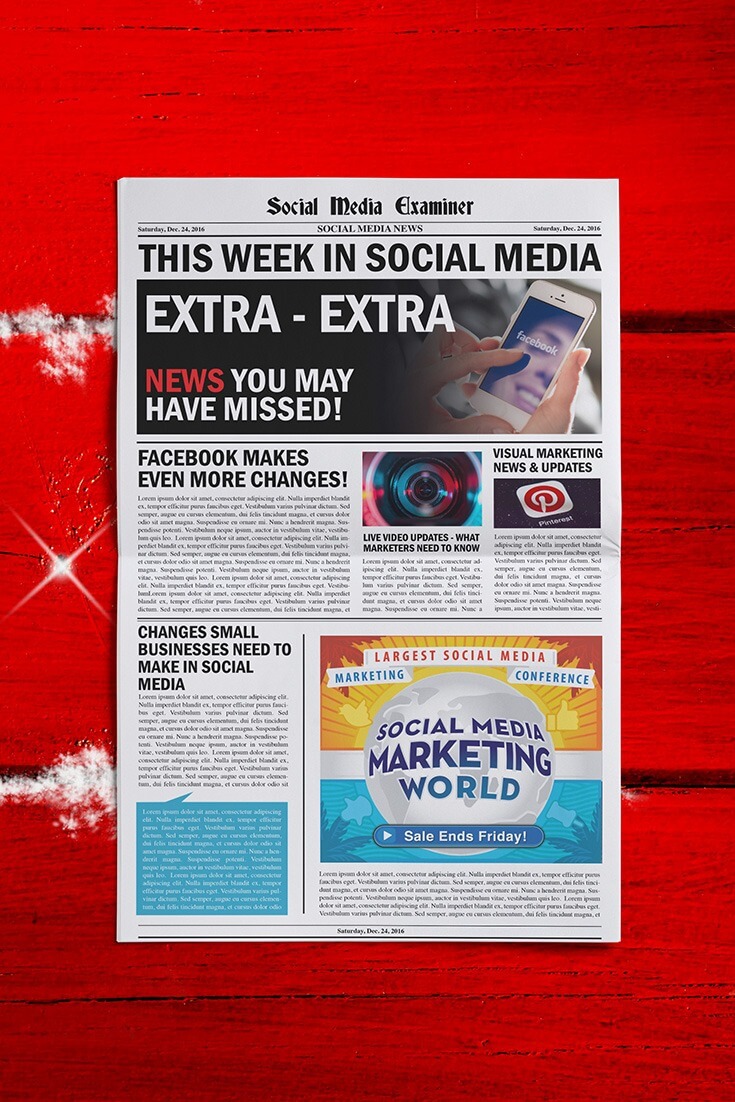 Group Video Chat from Facebook Messenger and other social media news for Dec. 24, 2016.