If you’re new to the show, click on the green “Watch replay” button below and sign in or register to watch our latest episode from Friday, August 11, 2017. You can also listen to the show as an audio podcast, found on iTunes/Apple Podcast, Android, Google Play, Stitcher, and RSS.

Facebook Launches New Watch Tab for Original Programming: Facebook introduced the new Watch tab, “a place where you can discover shows your friends are watching and follow your favorite shows and creators so you don’t miss any episodes.” The featured content will be personalized to each user and viewed on Facebook’s mobile app, desktop site, or its TV apps. As you watch each show, other people’s comments and reactions will populate just as they do on Facebook Live videos. Watch is rolling out “to a limited group” of people in the U.S. as a test, but Facebook plans “to bring the experience to more people soon.” (9:32)

Facebook Unveils Shows From 30+ Broadcasting Partners and Introduces New Show Pages: Facebook’s new Watch platform will initially feature professionally produced, short-form videos from premium broadcasting partners such as A&E, Hearst, MLB, Time Inc., and more, but Facebook’s goal is for Watch to be a platform “for all creators and publishers to find an audience, build a community of passionate fans, and earn money for their work.” To make it easy to develop or discover a Facebook show, it’s rolling out Show Pages.

Over time, creators will be able to monetize their shows through Ad Breaks (which Facebook has been testing over the past few months) or sponsored shows. Publishers and creators interested in creating a show for the new Watch tab can inquire about Show Pages online. (19:25) 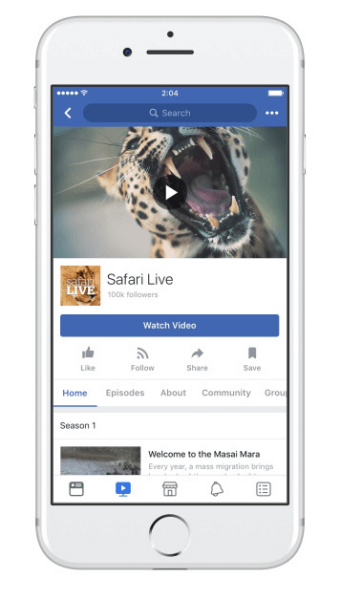 Facebook Show Pages make it seamless to create and publish new episodes for the Watch tab.

YouTube Adds Chat and Sharing Features to Mobile App: YouTube announced that users can now directly share videos and chat within the YouTube mobile app. The YouTube blog reports that the shared videos can be found in a new Shared tab in the app, “making it easier than ever to catch up on videos your friends have shared or to show them a few of your own favorites.” The Next Web reports that YouTube has been testing this sharing feature since the beginning of the year and is now ready to roll it out to “all users globally.” (31:56)

YouTube Clarifies Video Monetization Guidelines: Recently implemented stricter monetization controls and guidelines have resulted in some YouTube creators seeing a decrease in their ad revenues due to their videos being “classified as not suitable for all advertisers.” In response, YouTube plans to “roll out new icons that will give [creators] a more detailed understanding of how each and every video on [their] channel (or channels) is monetizing.” YouTube also offers the ability to appeal a video’s classification and get troubleshooting help for monetization issues. (36:03)

Facebook Tests Ability to Go Live From Facebook Camera, Stories, and Live Audio: Facebook is testing the ability to start a live video broadcast through Facebook Camera, from inside Facebook Stories, or while recording live audio. Facebook is currently testing this new feature with a select group of users and hasn’t announced plans to roll it out more broadly. (39:00)

https://newsroom.fb.com/news/2017/08/introducing-watch-a-new-platform-for-shows-on-facebook/ Do you have it yet? – Erik

Instagram Tests Ability to Share a Live Video Broadcast With Another User: Instagram began testing “a fun way to go live with a friend” with the tap of a button. Broadcasters can now invite anyone who’s currently watching their live video to join them in a split screen conversation. Instagram shares that this new feature is currently testing with “a small percentage of [its] community” and will be rolling out globally “over the next few months.” (49:13) 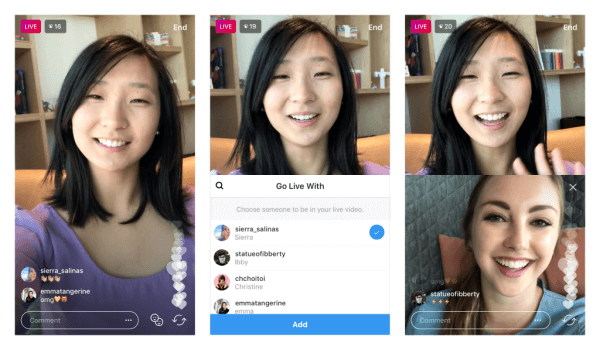 Facebook Ramps Up Artificial Intelligence Efforts and Review Process to Combat Cloaking: Facebook ramped up its AI efforts and human review processes to better identify, capture, and verify “cloaking,” a technique used by spammers to disguise the true destination of an ad or post or the true content of a destination page to bypass Facebook’s Community Standards and Advertising Policies. Facebook will ban advertisers or pages found to be cloaking from the platform, but no other pages should see an impact on their referral traffic. 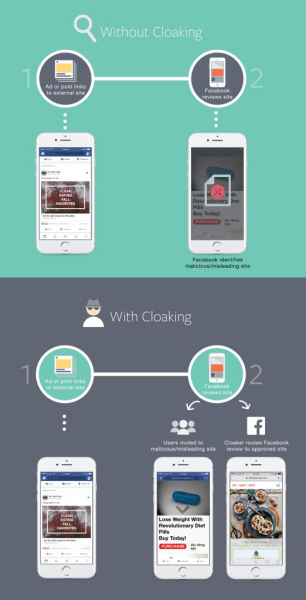 Facebook Quietly Releases Marketplace Experience on Desktop: Facebook Marketplace was initially rolled out on the Facebook mobile app and it now appears to be available on the desktop version of the site. 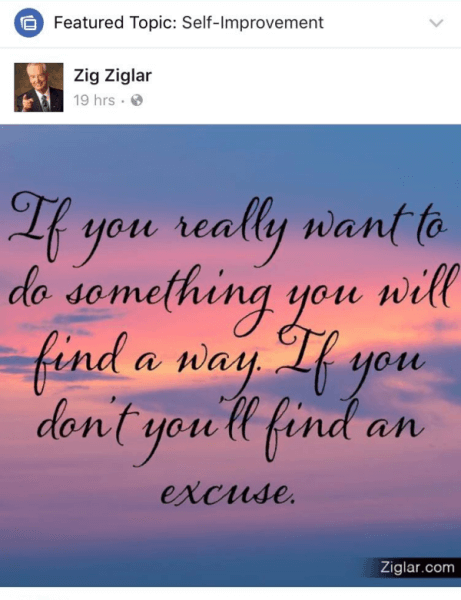 Pinterest Rolls Out Mobile Video Ads for All Advertisers: Pinterest is rolling out video ads that will play automatically without sound and appear within people’s feeds, search results, and the Related Pins galleries beneath individual pins on the mobile app. Pinterest began testing promoted video year ago with a handful of brands, but the video ads are now available to all advertisers. Video ads can be purchased through Pinterest’s self-serve platform, marketing partners, or account managers. 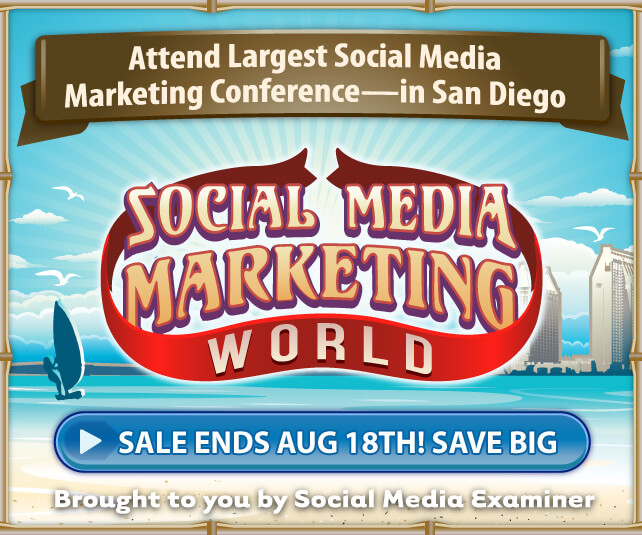 Google Removes URLs From Mobile Search Results: The Next Web reports that Google’s mobile search service on Android appears to no longer include URLs. Instead, Google only displays “the page’s title, a thumbnail of a featured image from the site, and a blurb.” Google hasn’t shared any details on whether this is just a test or will be rolled out more broadly.

Google might kill URLs in mobile search and ruin things for everyone https://t.co/QwJNnZ03Rt pic.twitter.com/1SiDwcDfwj

Twitter Tests Night Mode on Desktop: Last year, Twitter rolled out a Night Mode to its Android app. 9to5Google reports that Twitter is officially testing the Night Mode functionality on its desktop version. Twitter hasn’t announced when Night Mode will be widely available to all users.

LinkedIn Rolls Out Quick Access Features on Samsung Devices: The new Samsung Galaxy S8 and S8+ devices with the Bixby digital assistant can now quickly access LinkedIn’s content like top news of the day from LinkedIn’s Trending Storylines feature and relevant details on people you’re scheduled to meet through My Schedule notifications. 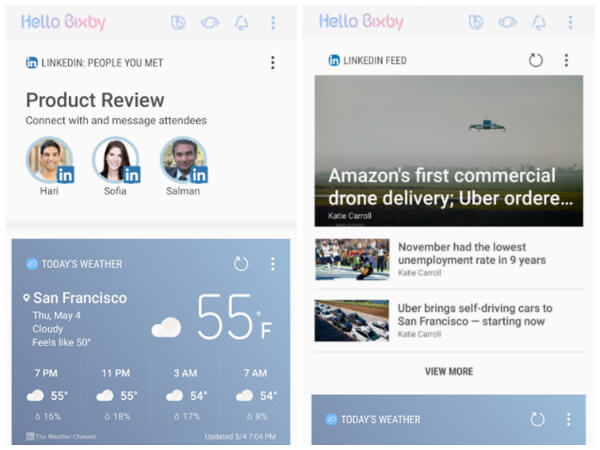 Anchor Introduces Anchor Videos: Anchor, a tool that enables “anyone to quickly and easily broadcast their voice to the world with the tap of a button on their iOS or Android device” launched a new feature called Anchor Videos. With Anchor Videos, broadcasters can “quickly turn audio segments into beautiful, shareable videos, featuring word-by-word transcription that syncs perfectly with [their] audio” and share the videos on social media.

Facebook Updates Clicks and Impressions Reporting: Facebook rolled out two new metrics updates to its clicks and impressions reporting. Facebook announced that it will stop charging marketers for “unintentional clicks” on ads published through the Audience Network and these clicks will no longer be included in the metrics shared with advertisers and publishers. Facebook is also giving more insights on the total impressions received by ads with two new metrics. These include “gross impressions,” which captures all billable and non-billable impressions, and a granular look at impressions generated from right-hand side placements with “auto-refresh impressions.”

Amazon Potentially Seeks to Leverage Augmented Reality for Shopping: A newly published patent hints at Amazon’s possible future plans to leverage augmented reality for ecommerce. With this technology, shoppers could simply point their smartphone and an augmented reality app will show them an item superimposed on the space within the camera display. GeekWire reports that possible items may include “jewelry, eyeglasses, watches, home furnishings, and so forth.” Amazon hasn’t commented on this patent filing.

Augmented reality could be the next frontier for online shopping, especially if the algorithm builds in some bling.

Google+ Removed Share Counts From Social Buttons: Google+ announced plans to streamline the new sharing dialog by removing the +1 display from the G+1 button. Google assures publishers that this update won’t “affect search ranking and the size, Google also states that the layout of the button will remain the same” and “only affect the G+1 button outside of Google+” and “the +1 button within Google+ will continue to work the same way it always has.”

Facebook Rolls Out New Anti-Clickbait News Feed Algorithm: Facebook is rolling out a new anti-clickbait algorithm that will further reduce clickbait headlines in the coming weeks. According to Facebook, this update will withhold exaggerated, distorted, or inaccurate stories and rank the stories that users want to see higher up in their feeds. Facebook anticipates “that most Pages won’t see any significant changes to their distribution in News Feed as a result of this change.” However, pages that rely on exaggerated headlines should expect a drop in their distribution.

Google Develops Rival to Snapchat Discover Feature: Google is developing a new service for publishers that “will allow them to create visually oriented media content similar to Snapchat’s ‘Discover’ feature.”  The Wall Street Journal reports that Google is currently in negotiations with media companies such as Vox Media, the Washington Post, Time Inc., CNN, and Mic and a preliminary version of the product could be available as early as next week.

Facebook Discontinues Stand-Alone Groups App: Facebook announced plans to discontinue the stand-alone Groups app for iOS and Android after September 1, 2017, and focus on groups in the main Facebook app and on Facebook.com. Facebook is currently developing additional tools to improve the overall groups experience. 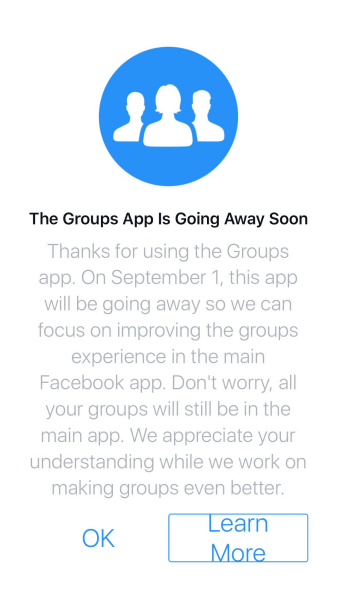 Facebook will discontinue the Groups app for iOS and Android after September 1, 2017.

WordPress.com Opens Service to Third-Party Plugins and Themes: WordPress.com announced that business users can now access and add third-party plugins and themes built by the WordPress community. This new customization feature allows users “to connect their sites to great email and social media tools, e-commerce solutions, publishing and subscription services, and more” and comes with real-time concierge support to help them “make the most of these new features.”

YouTube Tests Video Playback Speed Controls on Android App: YouTube appears to be testing the ability to play a video up to 2x faster or 0.25x slower than its originally uploaded speed in the latest version of the YouTube Android app. Video playback speed controls have been a long-time feature on YouTube’s desktop experience, but this is the first time YouTube is expanding this tool to its mobile app. YouTube hasn’t confirmed or provided any details on this possible new feature. 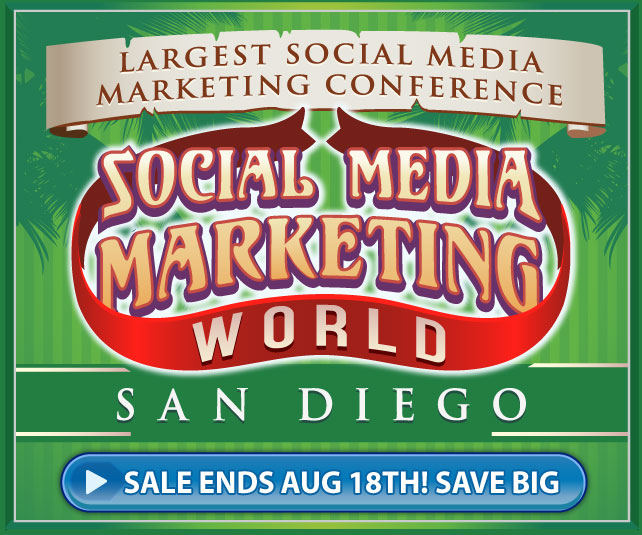