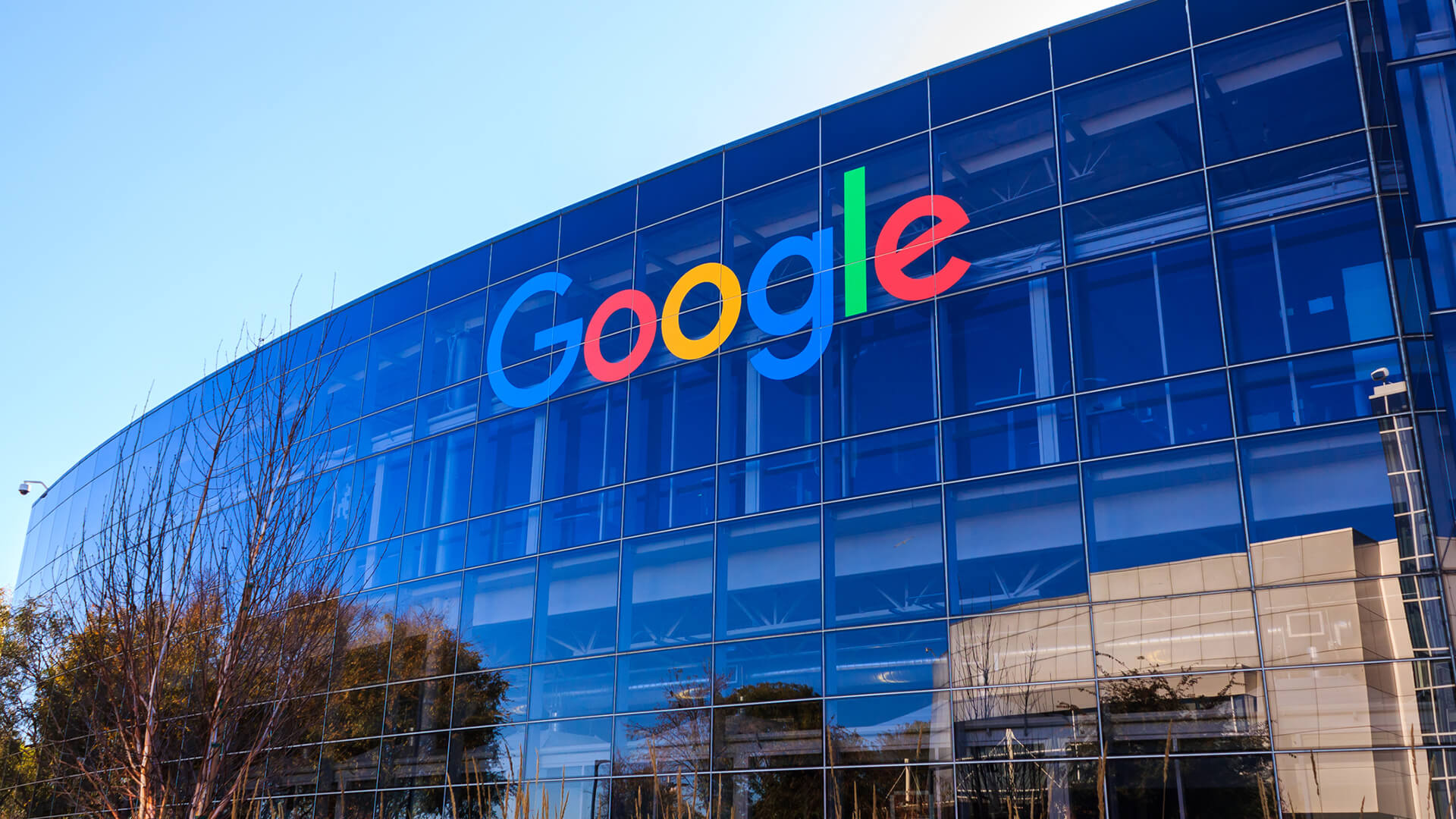 
Yes, you read the title right.

I’m one of those freaks who thinks that Featured Snippets are not perpetual manna from heaven and could see their divine role on the SERP diminished as time goes on. I understand this could be considered search marketing heresy. Though to be clear, I’m not advocating for a loss of the zero-position box’s supremacy. What I believe is the SERP feature’s evolution and recent advancements have the potential to steal some of the content creator’s traffic.

Let me state the obvious, traffic rooted in a Featured Snippet depends on the user clicking the URL within it. But what is also true is that Featured Snippets have evolved into less clickable entities. I could offer all sorts of long-worded elucidations on how Feature Snippets are morphing, and in a way have already changed, into less potent traffic generators. For now, however, I’m going to walk you through three formats of snippets that have emerged to foster the idea that what was once an important win may be less so in the future.

Why would I ever advance the notion that Featured Snippets are slowly creeping away from being the SERP win of all wins to being… well to being less so? Take this example.

Is it a Featured Snippet? Is it a Direct Answer? (Maybe it’s a Knowledge Panel?) Who knows… and does it really matter? What matters, essentially, is that Google has seamlessly merged a Featured Snippet with a Direct Answer. What matters less is this particular example. Like a game of chess, an individual move is far less important than the overall strategy. Google tacking on the epitome of the clickless SERP to the most potent traffic force on the results page should legitimately raise some eyebrows and force the question: Where is all of this going? If you’re banking on traffic from Featured Snippets, I would imagine that seeing this does not bode well for your confidence in the SERP feature’s future as a traffic powerhouse.

That said, I know you. You’re skeptical. I mean look at this example, who is this catering to? The only user who will be satisfied by the Direct Answer formatting here is someone who is searching for a keyword along the lines of “name of bb king’s guitar,” and that’s not even the keyword here.

However, not every Direct Answer has to have such an isolated if not idiosyncratic visual format. The essence of the Direct Answer resides not within the format exactly, though that helps, but in its function. Let me show you what I mean. Here is what you get for the keyword “name of bb king guitar.” 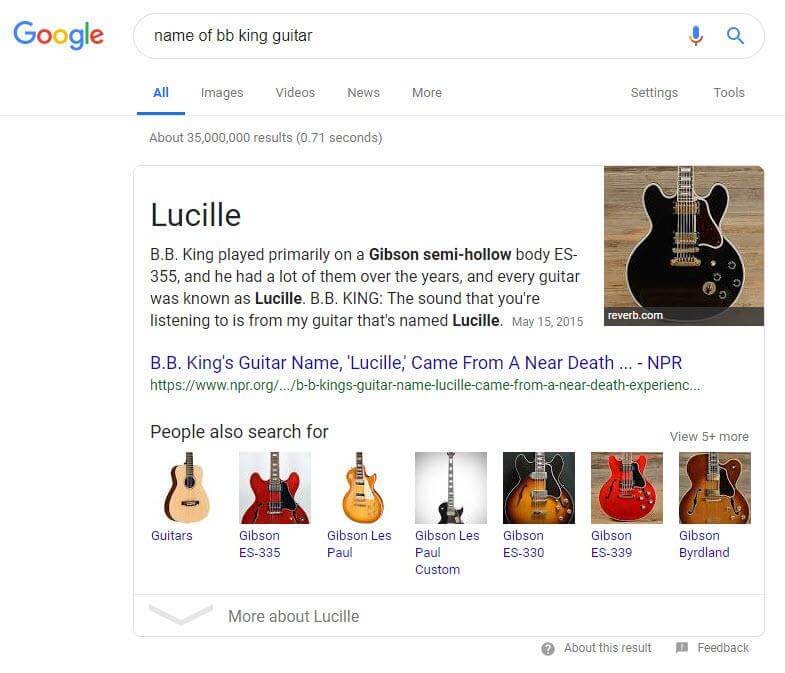 Basically, this is a Direct Answer. I know it doesn’t look like one, but in function it is. The prime user (i.e., they who wish to know the name of the blues legend’s guitar) need not click on anything to get the information needed from the search.

A consistent illustration of this dynamic are queries related to price. Often enough, Google indicates the price related to the query as a precursor to the content within the snippet. 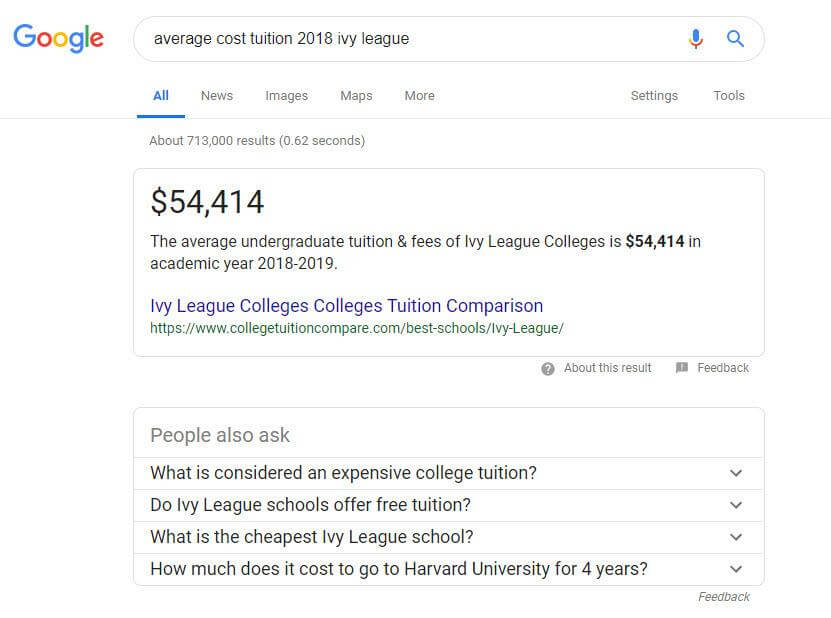 Incidentally, large headings that serve as Direct Answers are not the only way Google presents a way for users to bypass the click. The search engine has multiple ways of presenting content that precisely satisfies the user’s needs. Take the Featured Snippet for “how much is parking at JFK airport.” 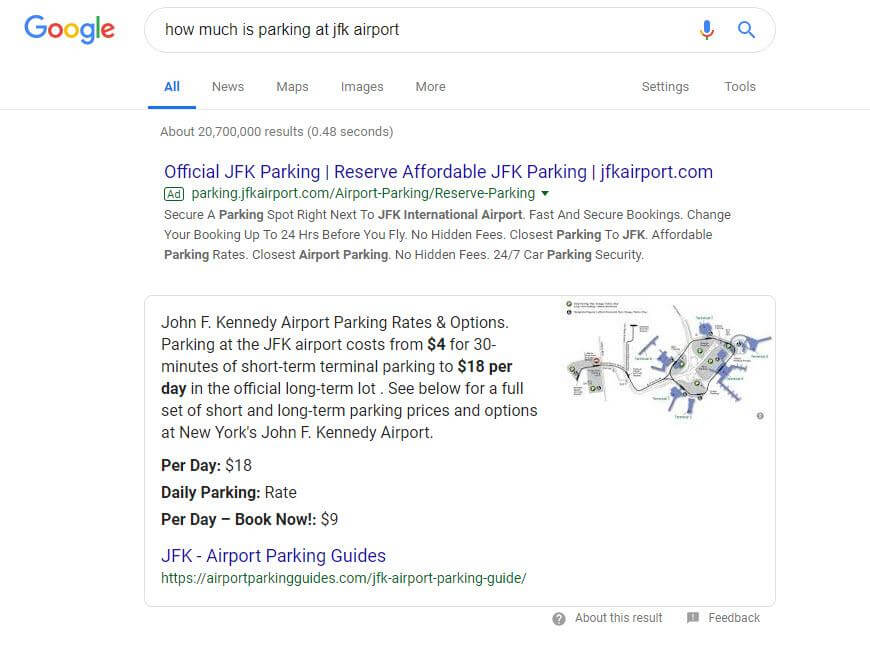 Above, information was extracted from a table on the associated page (below) and may certainly provide the user with the exact information they are in search of. No click needed. 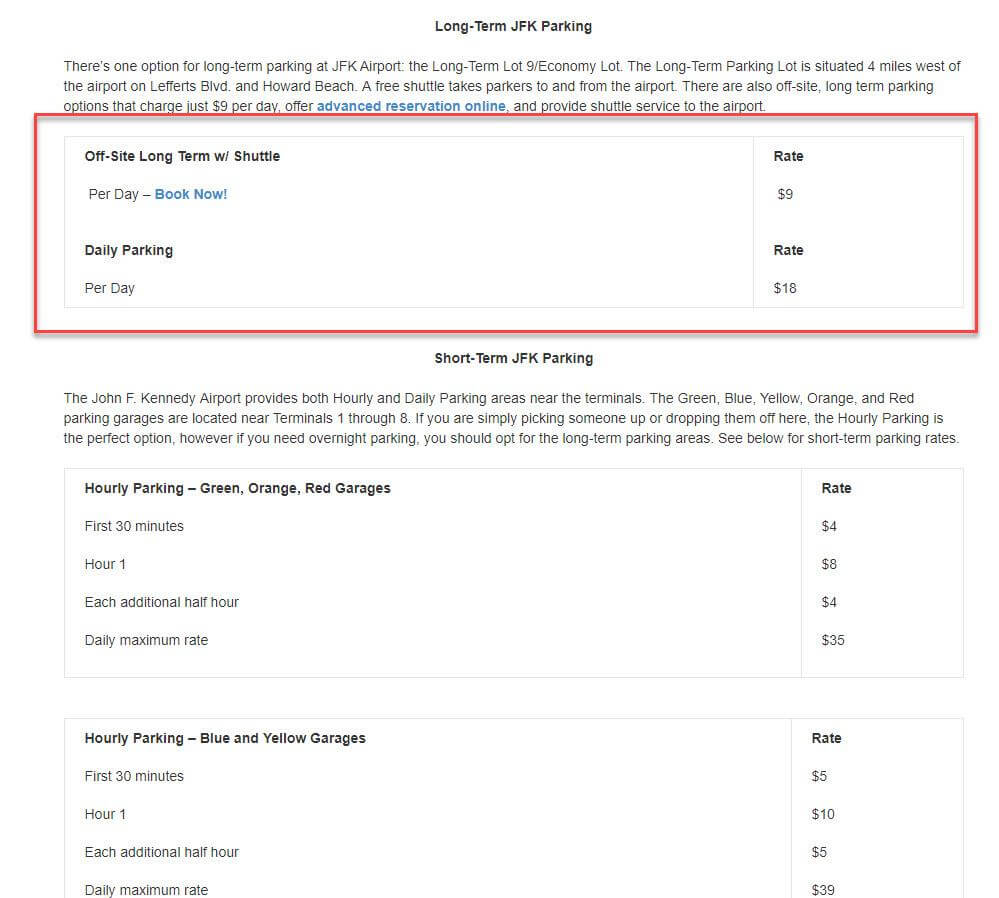 Similar to the above, Google now shows Featured Snippets along with other ancillary content by placing them next to Knowledge Panels and its newer cousin, the Explore Panel. 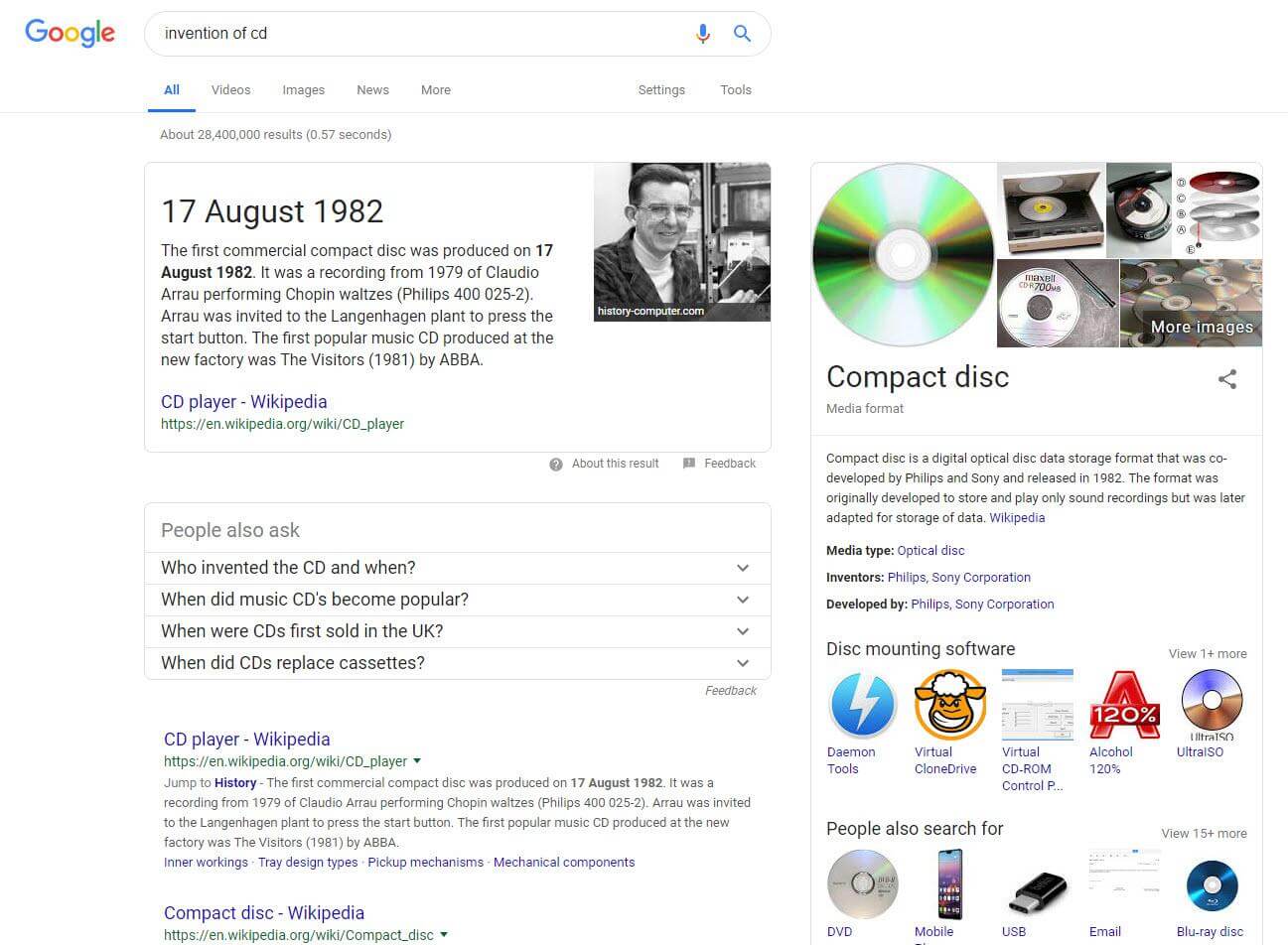 Competition from ancillary content need not come in the form of clicks to sites other than yours. Google has, and still does play with the notion of a Featured Snippet that resides atop of a Knowledge Panel. Here’s a doozy that I found back in July.

This is in many ways similar to what I just explained so I won’t harp on the point too much. What I will point out, and as is not hard to see, is that by placing additional content alongside the Featured Snippet the need for any click is significantly diminished.

If I’m going to burst your Featured Snippet bubble by illuminating the fact that they already aren’t the panacea of all things traffic, it’s incumbent on me to bring up lists. The common notion is that Featured Snippets present lists, either numbered or bulleted, are unassailable. The user is shown a partial list which can only be fully accessed with a click. What could be better?

Let me take you back to February, where we all lost our collective minds at the discovery of a Featured Snippet that required a tab to expand for the URL to come into purview. In my estimation, the outrage was a bit misplaced. In reality, I hardly believe the query, “seeds with highest omega 3” was ever going to produce the expected clicks from the Featured Snippet. Here’s what the zero-position box for the query traditionally looks like. 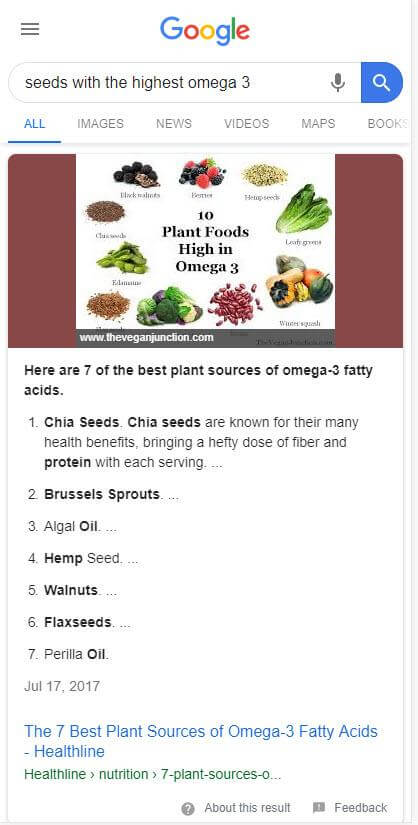 Google, zeroing in on the word highest presents a list of the seven seeds that contain the most omega 3. Notice, there is no prompt to explore more items as is traditionally seen with Featured Snippets. For the user looking to merely find those seeds that contain high levels of omega 3, there is not some imperative need to click. Traffic, in this instance, would come from users in search of information that goes beyond the surface intent of the query. There will be traffic to this site, just not in the way one might imagine. As you can see, expandable tabs hiding URLs were not needed to discourage clicks. The format of the Featured Snippet intrinsically does that for us.

The placement of “full list” content within the Featured Snippet appears to be categorical. Taking the example from above, many instances where the query incorporates language that reflects degree (i.e., most, highest, etc.) produce such Featured Snippets. In the below example, it would appear from the snippet that these fish, and only these fish, are those with high levels of Mercury. 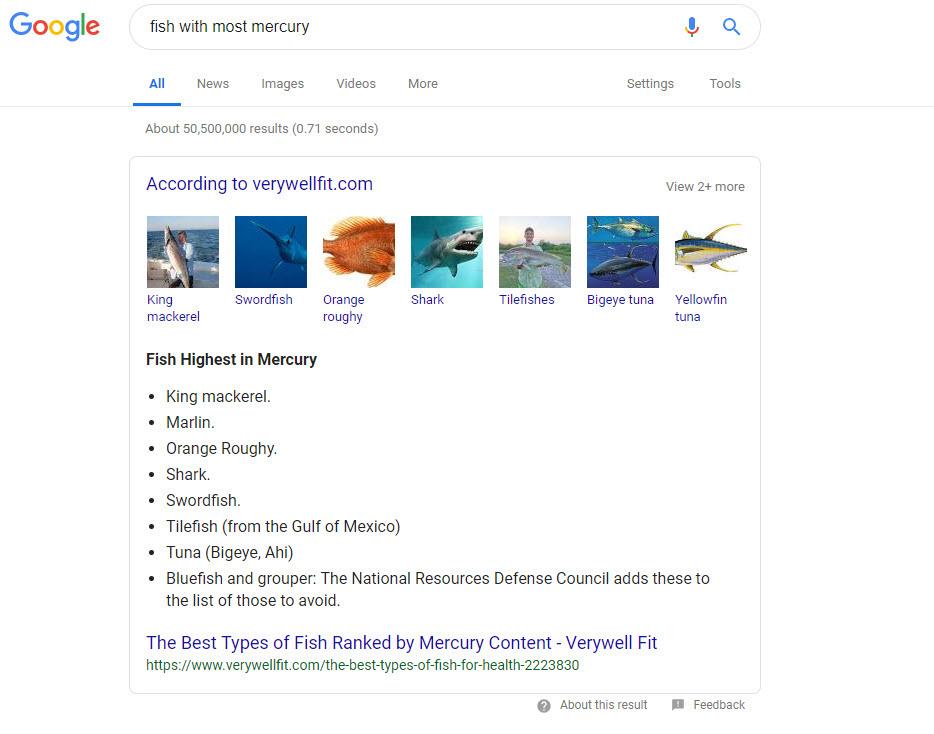 However, when looking at the site itself (see below), we discover that the list shown within the Featured Snippet is part of a larger list of fish that are high in the potentially poisonous substance. The format of this Featured Snippet’s content discourages the need for a click, to a degree. 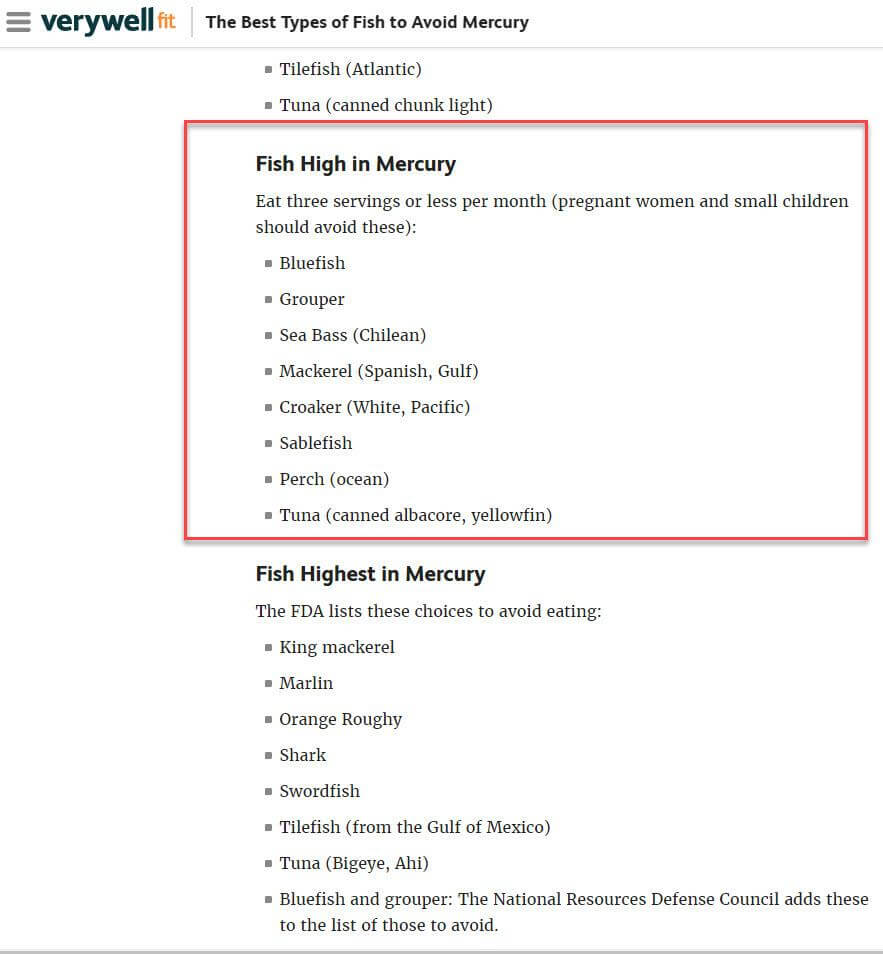 Why it’s only going to get worse

Having presented why it is conceivable that our take on the impact of Featured Snippets may reflect what the SERP feature was in the past, not what it is now in many cases, but I need to elaborate on why I think this is only going to get worse.

There have been downright huge strides in Google’s ability to better dissect and understand what comes its way and how to present it on the SERP. Within the last year, we’ve been introduced to two powerful machine learning elements: Google’s neural matching and Topic Layer. My point is not to tout the advent of better ways to take in a query and spit out results. Rather, it’s to have us all remember that Google only wants to get better and for Featured Snippets that means not just more relevant content, but more concise content as well.

Google has no interest in showing its users snippets of content on the SERP that are long-winded. The idea is to offer the user a concise snippet of content that best answers their query. The more refined that content is, the better… as far as Google is concerned. And with the addition of all this AI, it’s well on its way. This leads me to Fraggles.

As brought to light by Mobile Moxie’s Cindy Krum, Fraggles offer Google the opportunity to present highly-specified content on the SERP. The specific indexation of small fragments of content only makes it more likely that the content found within a Featured Snippet will be that much more concise.

To make matters worse, and as demonstrated above, Google is already very efficient at pulling a word or two out of the main snippet content and using it as a form of Direct Answer. As Google’s current machine learning properties assimilate information and as new elements are introduced, this process will become increasingly refined, and potent.

All signs point to Google not only wanting to present shorter, more direct, hyper-concise content within the Featured Snippets but on its way to do so.

It’s not as bad as it seems

Now for the good news.

The moment a URL is placed at the very top of the SERP, it will garner clicks. A Featured Snippet, despite what I’ve found, will still be a win. My concern is that it may not be the win we expect. I also think we may be overestimating the potential of the SERP feature and its status as the ultimate win.

At this point, I don’t think you need to sleep with one eye open as Google marches towards putting Featured Snippets on a content diet. But it would be a good idea to carefully watch emerging trends and be aware of what is likely coming down the pike.

Mordy is the head of marketing for Rank Ranger, an industry leading all-in-one SEO reporting suite. Outside of helping to build the Rank Ranger brand, Mordy spends most of his time working to help educate the SEO industry by publishing a constant stream of in-depth research and analysis. You can hear Mordy take up the latest issues facing the SEO community on his weekly podcast, The In Search SEO Podcast.
featuredSEOsnippetsWin