In February, Google kicked out the “Ad” label with the green background in favor of a version with a thin green border on a white background. We’ve updated our look back at the way Google has treated ad labeling in its search results, first published July 25, 2016.

The debut of Google’s short-lived green “Ad” label on text ads in the search results had marked the first time the color of an ad demarcation was the same color as an element in both the ads and organic listings: the display URL. The green border and font used in the latest variation is also the same color as display URLs.

Below is a look at the major updates to the treatment of Google text ads.

In 2007, there was the shift from the long-standing blue to yellow. In 2008, Google briefly tested green before reverting back to yellow. Google tested variations including bright blue and a light pinkish-purple in 2010, and the pinkish-purple replaced the yellow, but that only lasted about a year before yellow reappeared in 2011. In 2013, Google tweaked the yellow to a paler shade. At the end of 2013, Google began testing a yellow ad label next to each text ad in the mainline and removed the background shading. The yellow “Ad” label rolled out globally in 2014 in a much smaller size than first appeared in the initial testing. That label size hasn’t changed from the solid green of 2016 and the outlined version of today. 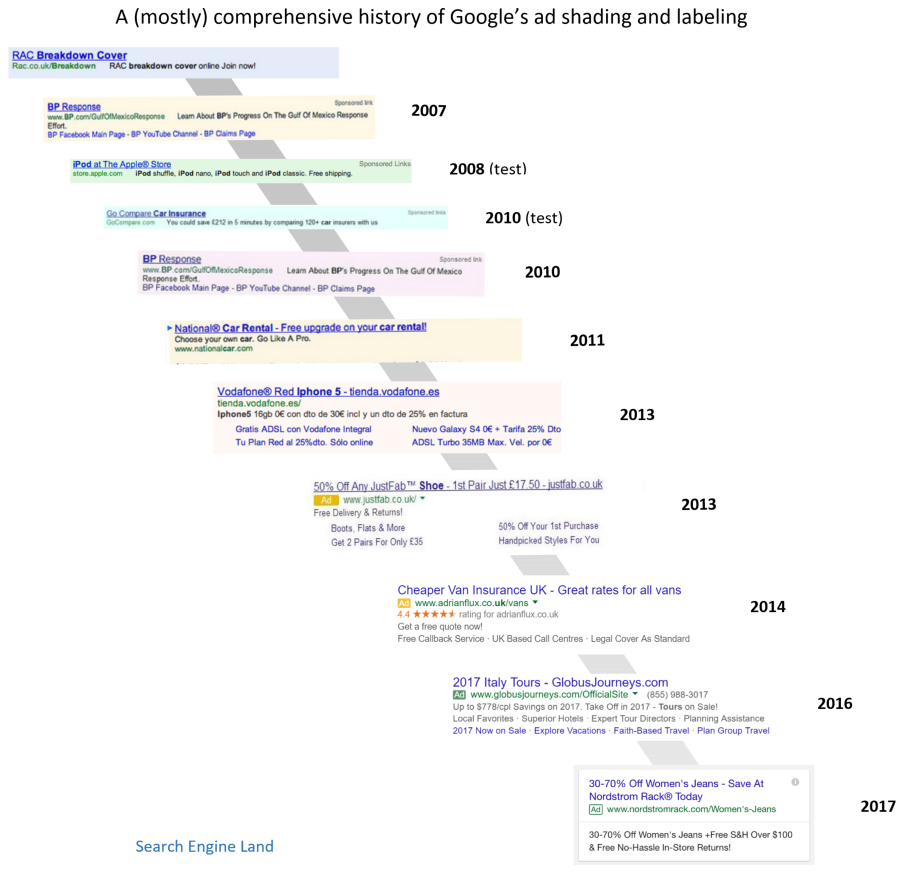 Google labels its text ads nearly the same way across mobile and desktop, including mobile web and Google iOS and Android search apps. The one difference is that Google displays the “i” (more information) icon that explains why those ads are showing is included next to each text ad in mobile web and app results. It does not show at all with text ads on desktop. The 2017 ad in the graphic above is from mobile.

Trying to see how the ad labeling helps distinguish ads from organic content isn’t as easy as it used to be. On desktop, there is typically a small amount of space visible above the fold below the four ads, but that real estate sometimes shows a map (as in the first example below) or image results. For results with ads on mobile, three of the four text ads, or one text ad and product listing ads, are typically all that’s visible above the fold. This is how the search results looked last year on desktop, mobile web and the Google app when the green background debuted. 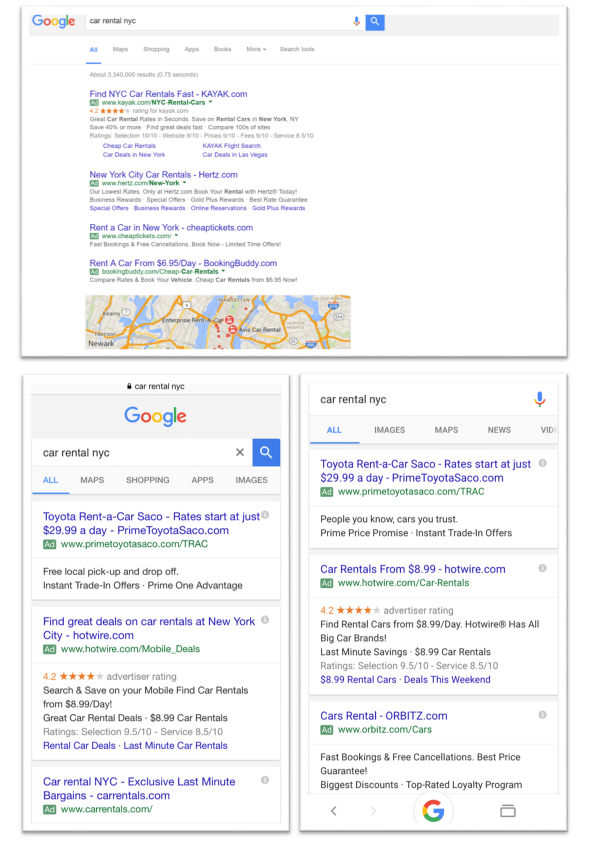 Here’s an example of what the results look like now. Expanded text ads have rolled out. In the mobile and app results, the top ad is enormous, displaying with sitelinks, rating annotations and three location extensions. 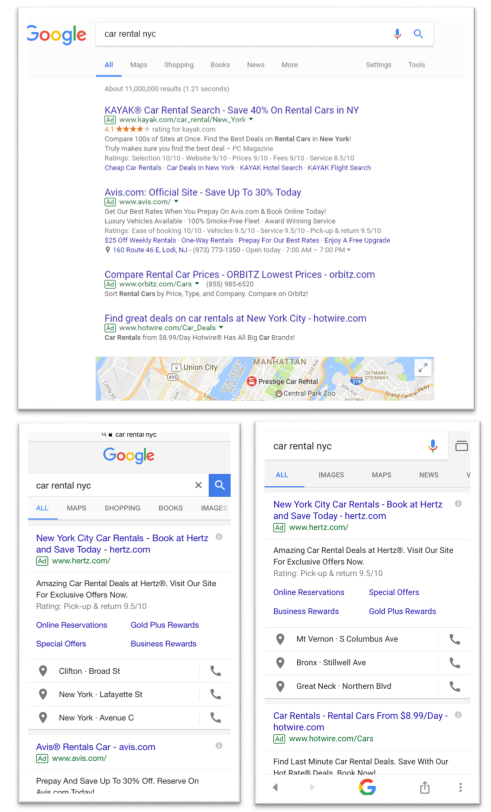 In this example with product listing ads, arguably the most prominent feature on both mobile results is the distance callout in the first ad, which is a local inventory ad. 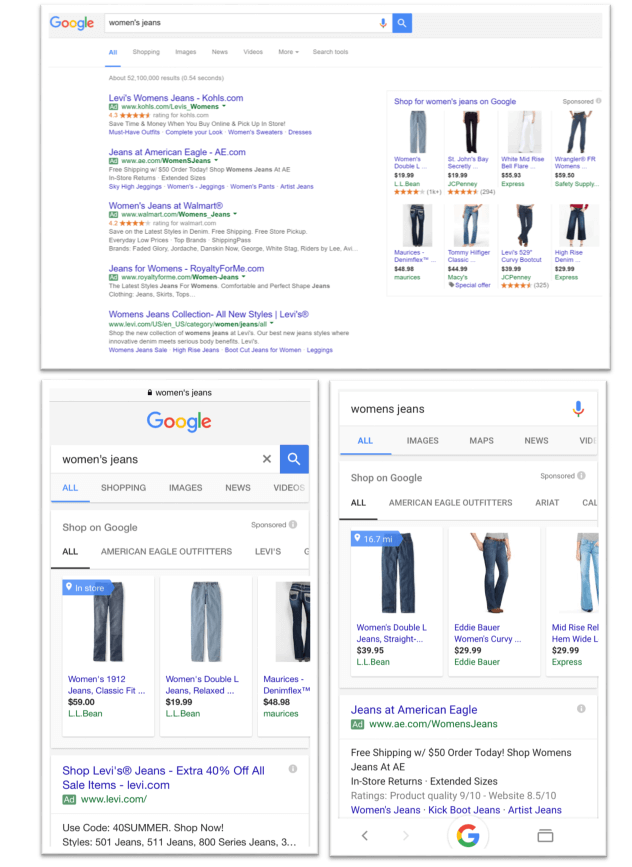 Not much has changed, though now the longer vertical format from mobile has been brought over to desktop. This desktop shows six PLAs, but Google sometimes shows blocks of nine. 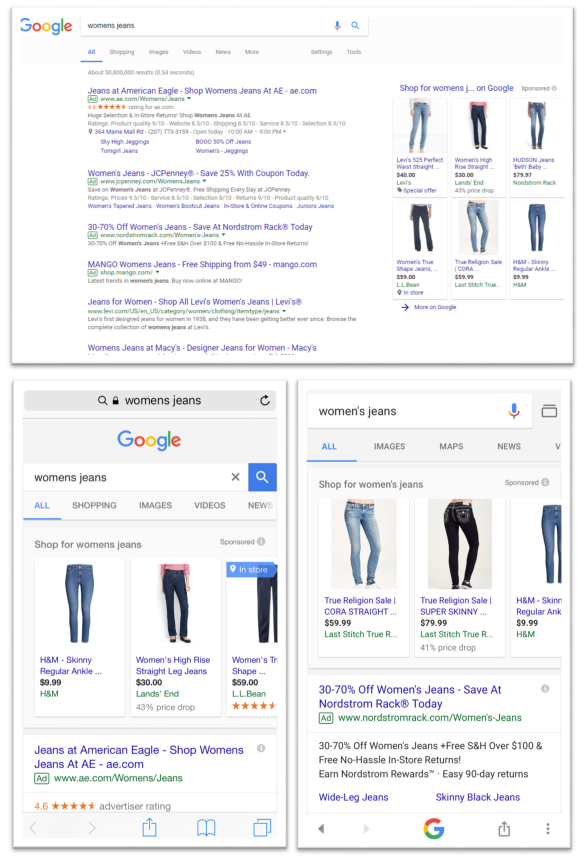 In fall 2015, I surveyed how Google, Bing and Yahoo each treat ads from organic content in search results. That was a follow-up from a prior look in 2013. From the loss of background shading to the adoption of an ad label that is the same color as the display URL it appears next to, Google’s ad labeling has grown increasingly more subtle. That said, it remains head and shoulders above the other search engines in terms of disclosures. Bing labels ads with a very subtle gray “Ad” label. The exception is in the Bing app, where the “Ads” label above the product ads is in Bing’s teal, as shown in the 2016 examples below. Bing now uses all-caps “AD” in its labels, and the “ADS” label in the app is now less bold. 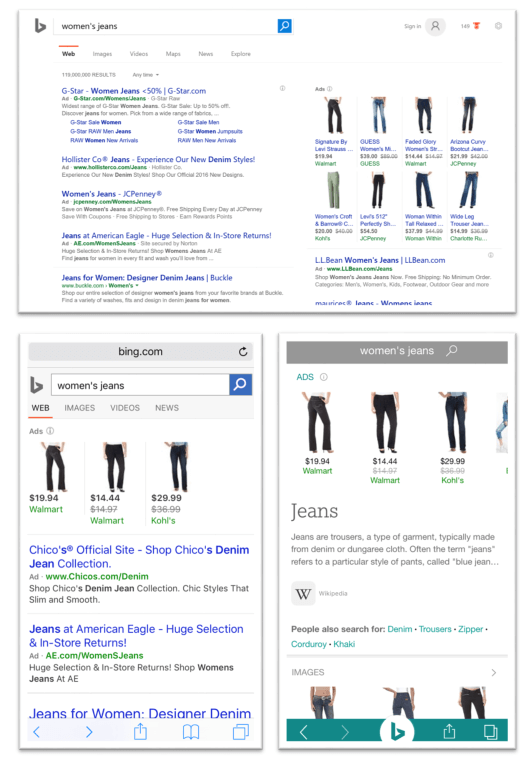 Our 2013 look at search engine ad disclosures came shortly after the Federal Trade Commission (FTC) noted a “decline in compliance” of search engines to clearly differentiate ads from organic listings and issued and called for clearer design treatment for ads suggesting:

(1) more prominent shading that works across monitor and device types, or

Now, four years later, disclosures are as subtle, or even more subtle than they were then. In May 2016, Sundeep Jain, who oversees text ads at Google, told the audience at SMX Advanced that the green ad label was chosen to simplify the colorscape on mobile.

“We want to make it easier for users to digest information on the page, so we’re gradually trying to reduce the number of variations of colors and patterns on the page and bring a little bit more harmony to the page, which is why we reduced one of the color elements on the page,” Jain said.

Google also stressed that testing showed consumers were no more confused about what was an ad and what was unpaid when the label was green than when it was yellow. It did so again with this latest version.