SEO – The rise (and further rise) of Google My Business spam 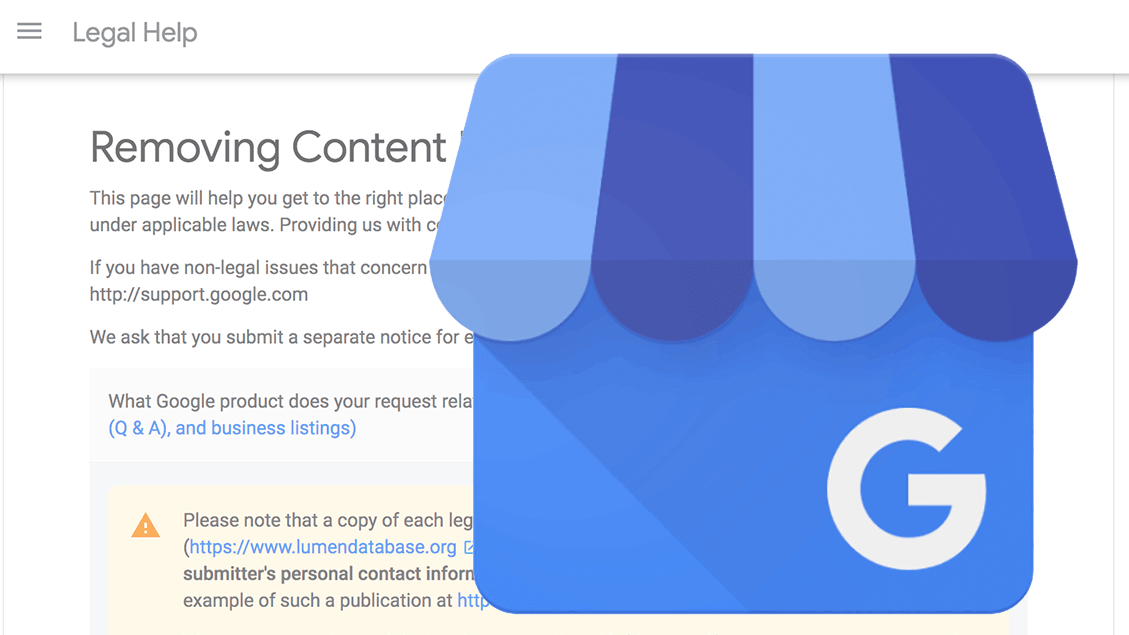 
Back in 2017, Google proudly told the world that it had eradicated 70 percent of all fake Google Maps listings in the two years prior. They put this down to innovations in machine learning and new business verification techniques.

Two years on, and it seems the machines are today wearing dunce caps and verification is just not working. How else do you explain Google My Business listings like these slipping through the net?

You’ll note that not only are these spammy, keyword-stuffed business names but that the supposedly trusted Local Guides trying to suggest edits to report them are having their edits rejected. We’ll come on to that in a little bit, but for now let’s take a look at how we got here.

Over the last couple of years, Google has been going all-in on expanding the functionality and potential use of its Google My Business profiles, elements of which appear in the Knowledge Graph, in Google Maps, and in the Local 3-pack.

Due to this increased use and visibility, and new social features like the introduction of a ‘Follow’ button for Google Maps users and ever-more-prominent Google Posts, consumers are being driven to consider a business’ GMB profile as a single source of truth, even over and above the local business website.

Because of this, GMB has become a wedge driven between consumers and businesses. Searchers can no longer get a first impression of a business created and tailored by the business itself. That first impression now belongs to Google, and for better or worse, search marketers have to make exceptionally good use of the wide range of available GMB features to ensure that their businesses or clients can stand out against their competitors.

With GMB now such a critical part of the consumer’s journey, it’s inevitable that people would seek to take advantage of weaknesses in the system in order to benefit their businesses’ positions. Thus we have Google My Business spam, and with it no end of keyword-stuffed business names, fake listings, fake reviews, and more.

The real impact of Google My Business spam

You might easily dismiss it as a non-issue, but whereas other instances of spam can be easily filtered out using technology, no such filter exists for GMB, and so spam on this platform can have far-reaching impacts.

These impacts have been well-documented in a recent BrightLocal poll that focused specifically on GMB spam. 77 percent of respondents felt that GMB spam made it harder to deliver good rankings for their own businesses or their clients.

Still not convinced it’s an issue? Imagine it this way: you’re a local SEO professional following every bit of best practice under the sun to optimize a website for the right search terms, to feed GMB the right data, and to generate great reviews. You put hours into this work and finally rank well for the required local search terms.

GMB spam isn’t just unfair, it risks damaging the reputations of Google My Business as a trustworthy source of information as well as the many industries which seem to be more likely to take part in GMB spam, like auto repair, locksmiths, garage door contractors, and (though they really should know better) legal professionals.

And although GMB spam isn’t a new problem, it seems to be getting more prevalent. The aforementioned poll asked how listings spam had grown in the previous year. 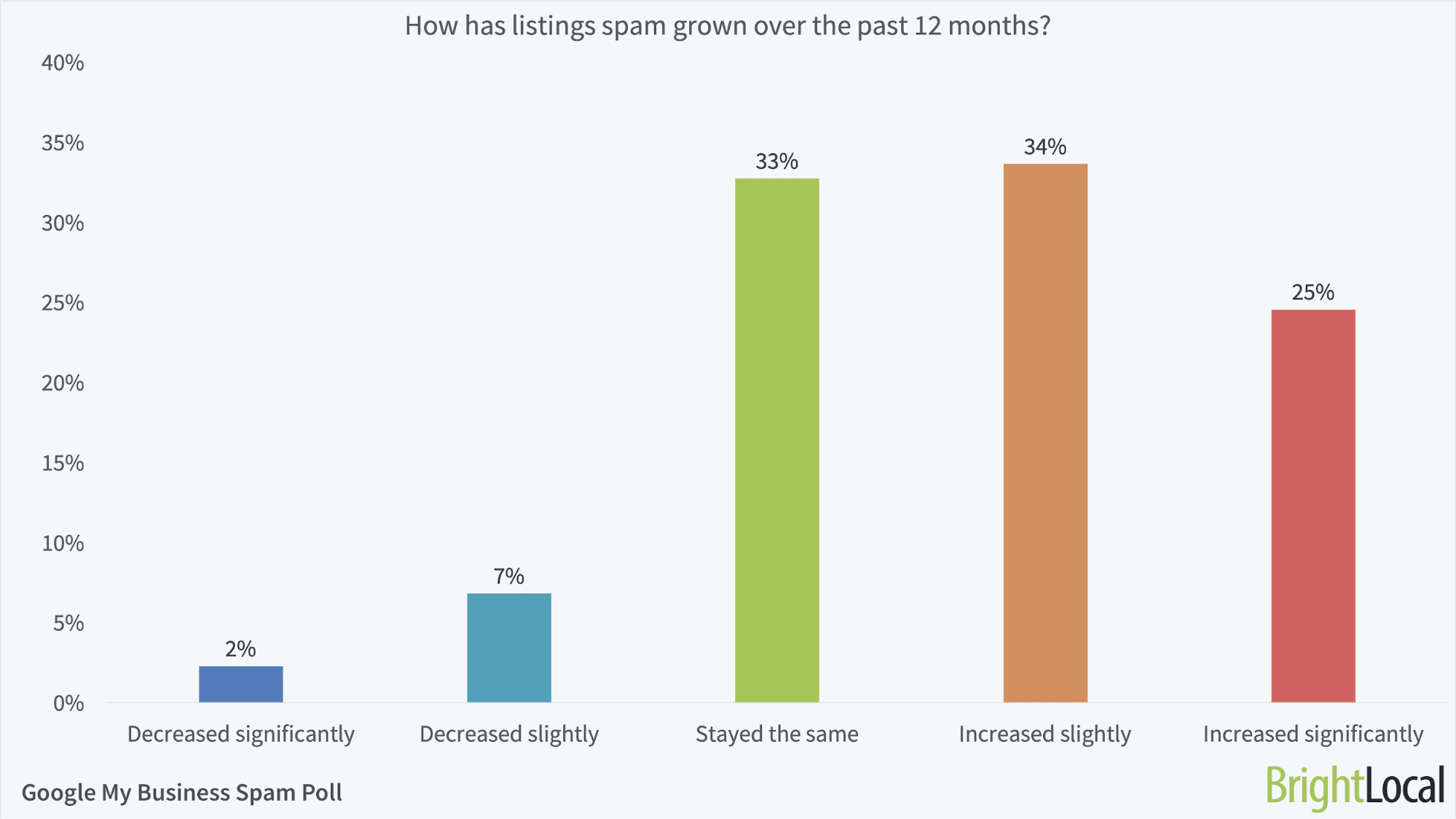 Who you gonna call…?

For a time, Google Gold Product Experts and spam-fighters like Joy Hawkins, Ben Fisher, Jason Brown, and countless others, gave their free time over to helping business owners report spam for removal in the (soon-to-be-defunct for reasons I’ll come to) Spam and Policy board in the Google Advertiser Community Forum. Sure, you could tweet @GoogleMyBiz or message them on Facebook, but this was a great way to add plenty of detail around a spam report and engage with someone who really cared, one on one.

Then Google took over.

For reasons I’m not personally privy to (but would love to hear your theories about in the comments below), Google made the decision to close the GMB Spam forum and instead encourage people who discover spam to report it via a new online form, stating simply:

“We’ll close the Spam board on this community, so please use the new form to report spam-related issues.”

“Complaints submitted through this form will be reviewed in accordance with our guidelines for representing businesses on Google Maps.”

As sad as I was to see the forum close, I rather foolishly believed that this was a sign that Google was going to finally take spam seriously, writing on the BrightLocal blog at the time,

“This week Google finally took a big step towards acknowledging the damage GMB spam does to consumers and businesses alike.”

What a fool I was. I thought that having human staff at the other end of these complaints showed Google was starting to care more, and that the use of a standardized form meant that the process of actioning complaints would be simpler.

Sadly, right now it seems I was wrong. Just follow the popular #StopCrapOnTheMap thread on Twitter and you’ll see an even more steady stream of Local Guides and spam-fighters sharing sadly comic examples of particularly egregious and obvious cases of GMB spam.

Even before this new wellspring of spam, Joy Hawkins spoke on an InsideLocal webinar about the efficacy of making ‘suggested edits’ to spammy GMB profiles (now one of the only recourses for Local Guides trying to fight spam), saying:

“I think it works less and less. It used to work a lot better when Map Maker was around because peers could review your edits, but we’re seeing suggested edits being less useful in most cases. Google’s turnaround time is about 3-4 months, we’ve been finding.”

So we already have a case where:

Looking today, 20-30% of the listings ranking for a personal injury lawyer term in a major city were fake. The situation is getting worse, not better. #StopCrapOnTheMap

Nice job @localguides – 6 years of MapMaker and your program, Level 10 with over 100k edits, only to end up like this… pic.twitter.com/6bMzn0FGLj

The above is a particularly bad example of Local Guides being stripped of their accounts without reason. While Google’s aim might have been to automatically delete the accounts of Local Guides behaving dubiously (a noble aim, I’d add), when dedicated Local Guides are unceremoniously removed from the program without warning, one has to question Google’s overarching approach to spam removal.

As always, this all comes with the customary silence from Google.

So what can we do about it?

Although the above might come as depressing reading, I must stress that the vigilance of good SEOs trying to do right by their local business clients is very heartening to see, so there is hope.

Google might be clumsily breaking the tools in our spam-fighting arsenal, but we’ll always have heroes like Dave DiGregorio (below) to thank for helping to spread the word about other, clever ways to identify spam:

Great little tip: Looking for spam listings on Maps? Use the search operator ‘allintitle’ to find them easily

This will find GMB listings with ‘car accident lawyer’ in the title – which we know, are most likely spam pic.twitter.com/gYcvM9Mby7

I still have faith that one day, once Google realize that the issue is damaging trust in their products (and, obviously, stopping business from advertising with them), they’ll invest in far better technology to finally #StopCrapOnTheMap.

Jamie Pitman is Head of Content at local SEO tool provider BrightLocal. He’s been working in Digital Marketing for nearly ten years and has specialized in SEO, content marketing and social media, managing successful marketing projects for clients and employers alike. Over this time he’s blogged his heart out, writing over 300 posts on a wide variety of digital marketing topics for various businesses and publications.
BusinessGoogleriseSEOspam