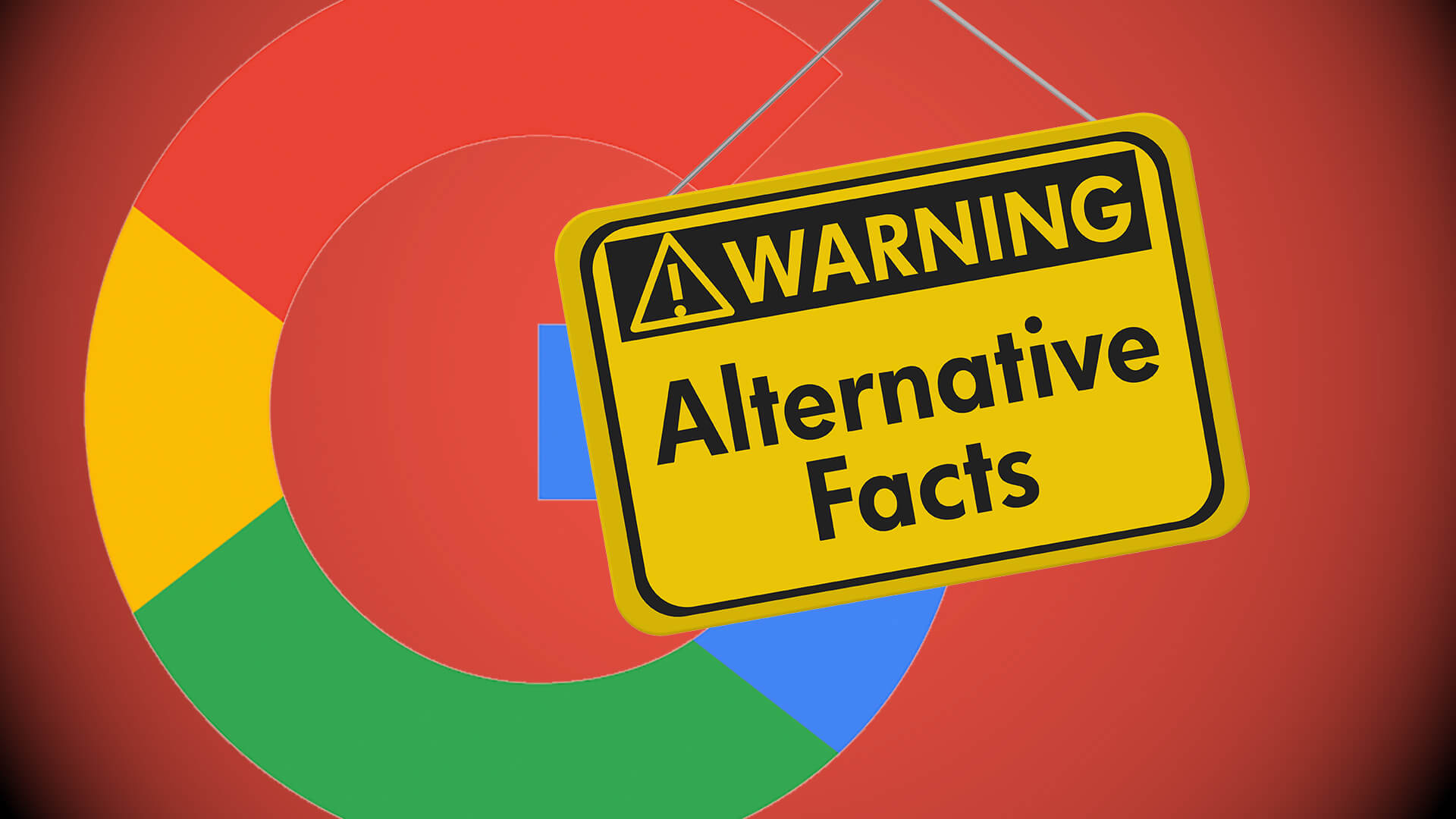 
Last October, Google launched support to highlight fact-checking articles within Google News in the US and UK. Now those articles will get special presentation as part of general Google searches worldwide.

Here’s an example of how the expanded fact checking looks, which begins today. Below is a search for whether Hillary Clinton sold uranium to Russia, something many have claimed, including President Donald Trump recently. A fact check from the popular Snopes fact-checking site appears first, saying the claim is false: 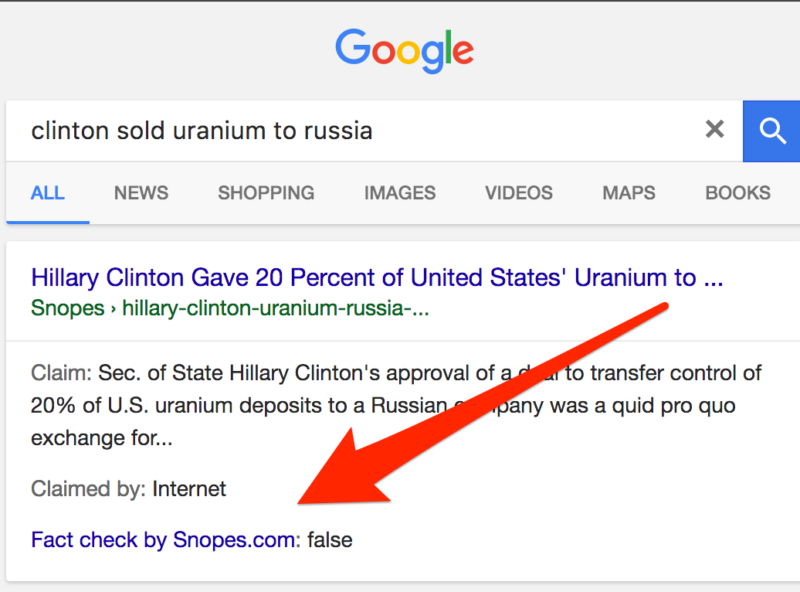 This is actually just a regular web search listing with special callouts (also known as “rich snippets“) to show who has made a particular claim and the verdict. In the example above, you can see the claim is attributed to the internet generally and that the claim is dismissed as false.

Here’s another example, for the claim that Trump has opened US national parks for coal mining: 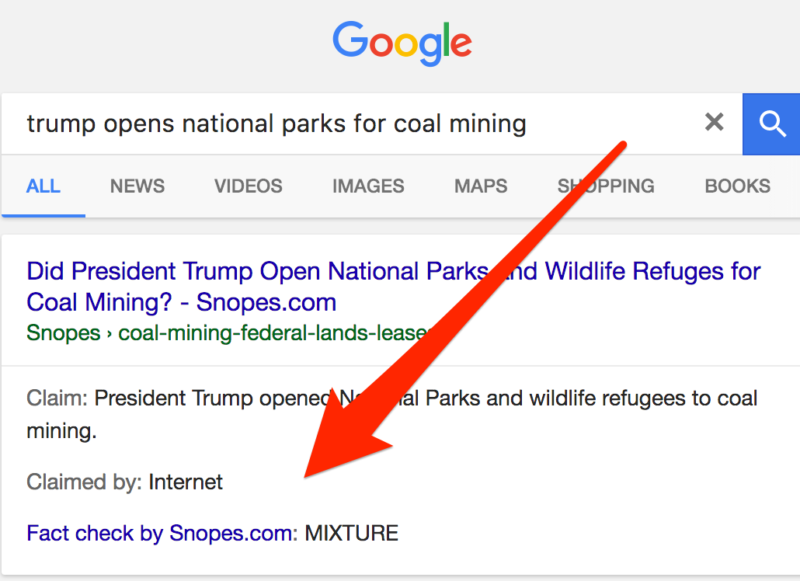 Again, Snopes is the fact-check source saying that the claim is a mixture of true and false.

Here’s one more example, about whether US Attorney General Jeff Sessions has been disbarred: 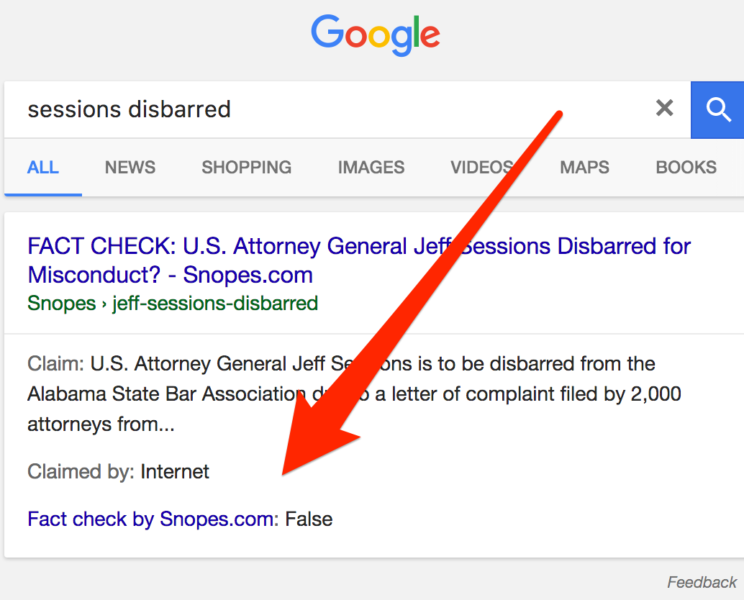 In this case, you can see that Snopes rates this claim false.

Fact checks allowed by any publisher

The examples above are all from Snopes. But any publisher on the web is eligible to gain the special fact-checking callouts.

Here’s an example Google provided that shows PolitiFact as a source: 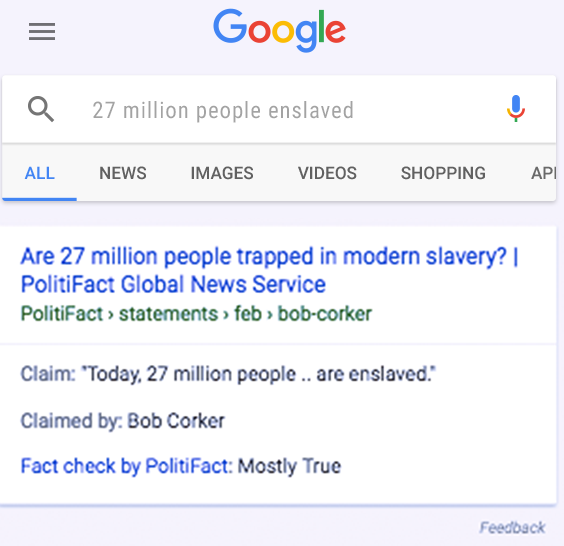 Here’s another Google provided that shows what happens if more than one fact-checking article is deemed worthy to appear for a particular search: 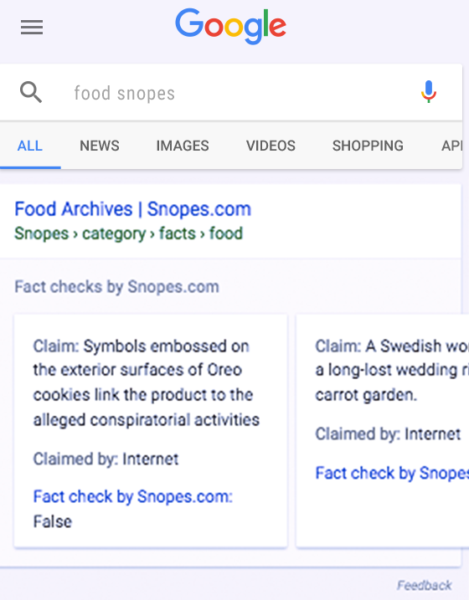 On mobile, you get a fact-check carousel, as shown above. On desktop, you get multiple fact checking articles showing up as part of the regular web search results.

While both the articles are from Snopes in the example above, in other cases, a variety of publications might be represented in the mobile carousel format or in desktop results.

Conflicting conclusions may be presented

Since Google will list multiple fact checking articles, this means that in some cases, you might get fact checks that disagree or conflict with each other, as Google notes in its blog post about today’s expansion:

This information won’t be available for every search result, and there may be search result pages where different publishers checked the same claim and reached different conclusions.

These fact checks are not Google’s and are presented so people can make more informed judgements.

Even though differing conclusions may be presented, we think it’s still helpful for people to understand the degree of consensus around a particular claim and have clear information on which sources agree.

Possibly, the new feature could mean that hyperpartisan sites of any persuasion could present “fact check” conclusions that are not really fact checks at all.

This is because any site can mark-up its content as a fact-checking article. Put the right invisible meta data on your page and voila, you’ve taken a key step toward becoming a fact-checking resource.

You also have to ensure that you’re doing things like being transparent about your sources and methods in fact-checking, but those guidelines don’t really cover whether your sources themselves have to show proven veracity.

The algorithm is the ultimate arbiter

Mark-up alone isn’t enough, however. Google says that its search algorithm also has to determine if a publisher is deemed an “authoritative source” for inclusion.

What’s an authoritative source and how is that determined? Google’s blog post doesn’t explain this, nor did Google share more in a follow-up response to Search Engine Land other than to say its algorithm uses a lot of signals to figure this out.

Google did tell Search Engine Land that sites that violate guidelines against things like promoting violence or hatred wouldn’t be eligible. But that restriction still might not prevent hyperpartisan sites from “fact checking” things with their own particular spins on the facts. How it will ultimately play out remains to be seen.

As for when fact checks are triggered, Google told Search Engine Land it will depend on whether a particular search finds fact check material among all the content that it considers when creating results.

For example, a search for “is the world flat” might not trigger a fact check unless there’s a formal, marked-up fact check article on the topic. But if someone’s taken the time to do that — and the algorithm deems that to be from an authoritative site — then the article might appear with the special fact check call-outs.

Google said that fact-checking articles get no special rank boost to move them to the first page of results or even necessarily to the first listing.

For more information, see Google’s blog post today and the documentation from Google about creating fact check articles. Also see our article from earlier this week on how this move may help with some of Google’s recent issues relating to search: A deep look at Google’s biggest-ever search quality crisis.