On February 19, 2016, Google confirmed it was eliminating text ads from the right rail of search results on desktop. Early results indicated that the change was a boon for click-through rates (CTR) in the four top spots. A year after the change, a new study illustrates just how significant the move has been for Google.

Not surprisingly, positions three and four have been the biggest beneficiaries of the change, with CTR increases of 72.4 percent and 51.9 percent, respectively. Position five, now shown at the bottom of the page instead of on the right side, saw CTR decline by just 7.6 percent after the change.

On the whole, CTRs for the top four ad slots have risen 49 percent since the change.

With text ads only showing in the mainline, Google began regularly serving as many as four text ads in the mainline results above the fold. The remaining ad slots appear at the bottom of the page below the organic results.

It should be noted that the study had a control group of ads that maintained steady ad positions before and after the change, but it did not control for expanded text ads (ETA), which rolled out in late July 2016. (A separate Accuracast study that compared ETA to standard ad performance in the five months after the rollout shows CTRs for expanded text ads were 19 percent lower than those of standard ads across a set of accounts.)

This latest study underscores findings by Merkle, which showed in its Q2 digital marketing report that performance improvements from text ads, coupled with the ability to bid separately on desktop starting in Q3 2016, have helped spur a resurgence in desktop ad spend . 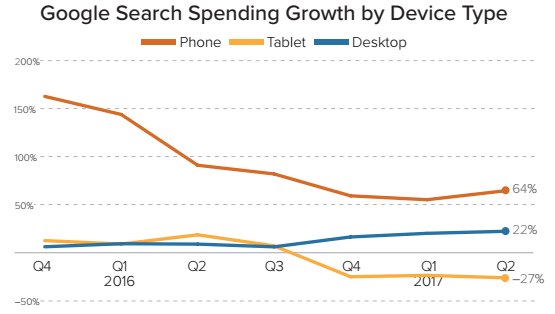