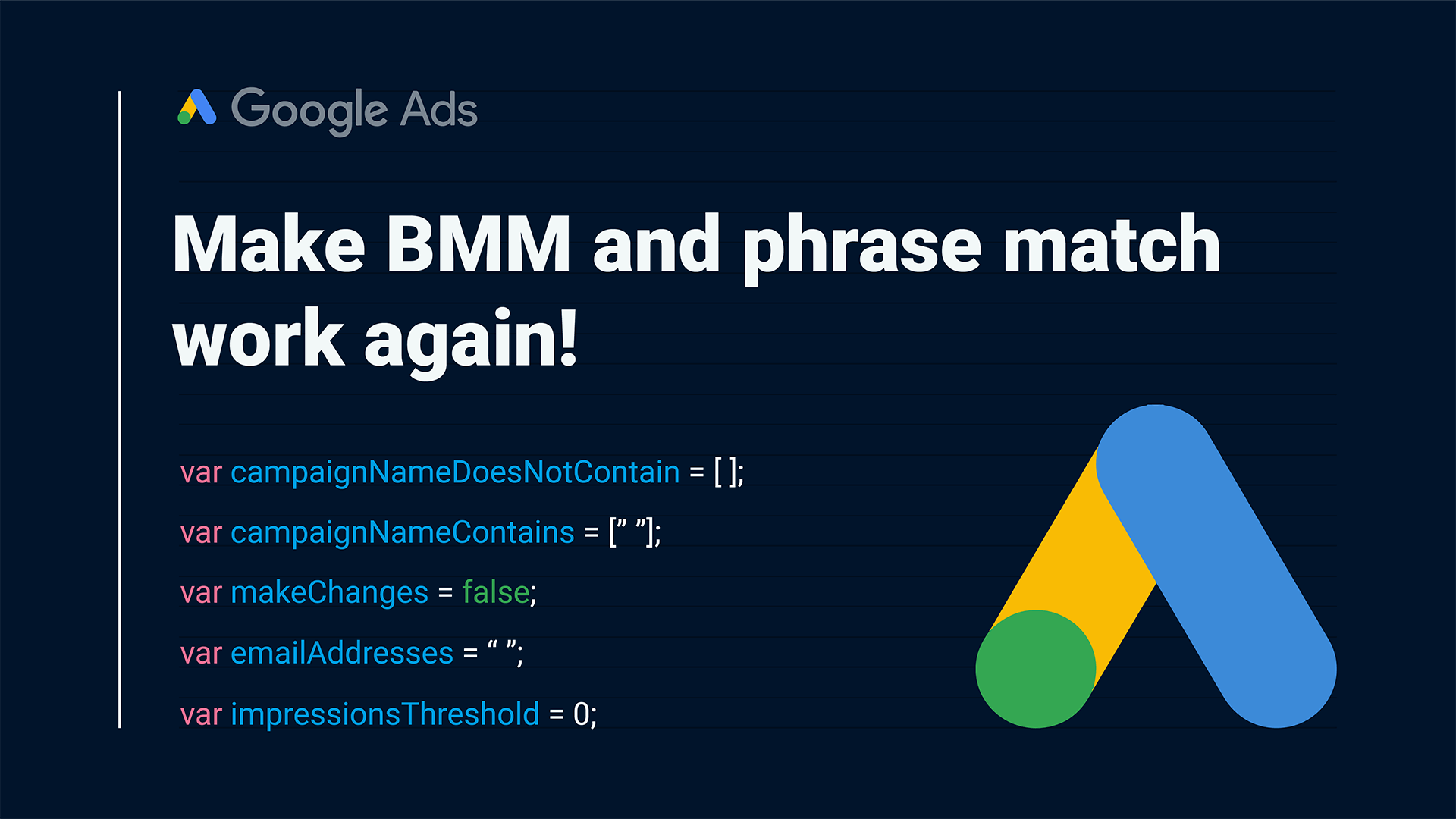 Not only are plurals, stemmings, misspellings and changes to word order all fair game for your keywords, now implied words and synonyms in search terms will also trigger phrase and BMM. For those of us who rely on precise keyword matching and granular data for the best insights to work with, this is another major blow.

But something can be done. We’ve got a script that provides a stopgap workaround that will tide you over until Google comes to their senses.

In case you missed it: it all started with Google’s tweaks to exact match which became, well… not exact in the slightest. First, they began allowing plurals, misspellings and stemmings for all match types in 2014. In 2017, they went a step further by ignoring changes to function words and word order when deciding whether a search term triggers your keyword.

Worst of all, in late 2018 they hammered the final nail into the coffin of exact match by allowing so-called “same-meaning” searches. Regardless of if it’s a paraphrase, requires an implied word or includes a synonym, if Google judges the “intent’ of the search to be the same as your exact match keyword, that keyword will be triggered. Now they’ve done the unthinkable, and brought these same-meaning close variants to phrase and BMM keyword types.

Why this is a problem

I’ve written about why imprecise matching is an issue when I’ve covered the changes to exact match (here, here, and here – all of which include a scripting workaround for that problem). Put simply, semantics matter. You might think that word order or plurals don’t make much of a difference, but paid search experts know, for example, that “london hotel,” “london hotels” and “hotels london” keywords perform differently. Previously, we could change our bidding for each of these keywords according to their respective value with fine-tuned precision.

The broadening of “close variants” to include so-called “same intent” searches compounds the problem further, especially for BMM, which is edging ever closer to being indistinguishable from true broad match.

Google argues that advertisers are likely to see a 3-4% uplift in conversions from their phrase and BMM keywords as a result. I’m sure this is true for some Google Ads users.

PPC experts, however, rely on precise, granular insights to inform optimizations and drive performance. Moreover, we probably already had the “new” traffic covered with specific keywords. These changes risk us poaching our own traffic through less precisely matched keywords, making our insights less granular. This muddier data impedes our ability to bid appropriately and to funnel traffic effectively.

I’ve already pleaded my case to Google to make this an option that you can opt into or out of. Until they see the light, however, we’ve come up with yet another workaround to ensure you’re spending your advertising dollars most effectively, this time for phrase match and BMM keywords.

What this script does

This script automates the workaround. For PPC practitioners with extensive keyword coverage, it will help preserve your funneling system by applying relevant phrase match negatives based on data from search term reports.

To do so, it begins by downloading a search query report. Then, it finds queries that meet two criteria:

It then applies this substring keyword as a phrase negative to the query’s original ad group match as selected by Google and evidenced in your search term reports. It sounds complicated, but what this means in practice is that queries will be funneled through to the most relevant keyword for the search rather than hitting on loosely related keywords judged by Google to have the same meaning or intent regardless of their spellings, function words, plurals, etc.

There are a few caveats:

You can set it to run however often you’d like (I’d suggest weekly or monthly after the initial run). It will email you a .csv file detailing the changes it has, or would have, made.

How to set it up

In the account you’d like the script to run, select Tools and Settings > Bulk Actions > Scripts from the top bar. Click the blue plus button in the top left of the scripts page to create a new script, give it a sensible name to make sure you can find it again later if you need to, and grant it any authorization requests that pop up.

You will then need to paste all of this code into the input box, and modify the inputs section at the beginning of the script as below:

Same logic as above, but for which campaigns you’d like to include.

When set to true, the script will add the phrase match negatives in in your account. If false, you will just receive an email.

Enter the addresses to be emailed when the script runs, separating with commas if you’d like multiple people to be notified.

If you’d only like to compare keywords with search queries that have received over a certain number of impressions (we advise you use this in larger accounts).

Once you’ve modified the inputs, save the script with the button at the bottom and navigate back to the main scripts page. From here, you can find your newly created script and set its frequency (in the third column as standard) to weekly or monthly, and you’re good to go!

Daniel Gilbert is the CEO at Brainlabs, the best paid media agency in the world (self-declared). He has started and invested in a number of big data and technology startups since leaving Google in 2010.