PPC – If Google says H1s don’t matter for rankings, why should you use them? Here’s why 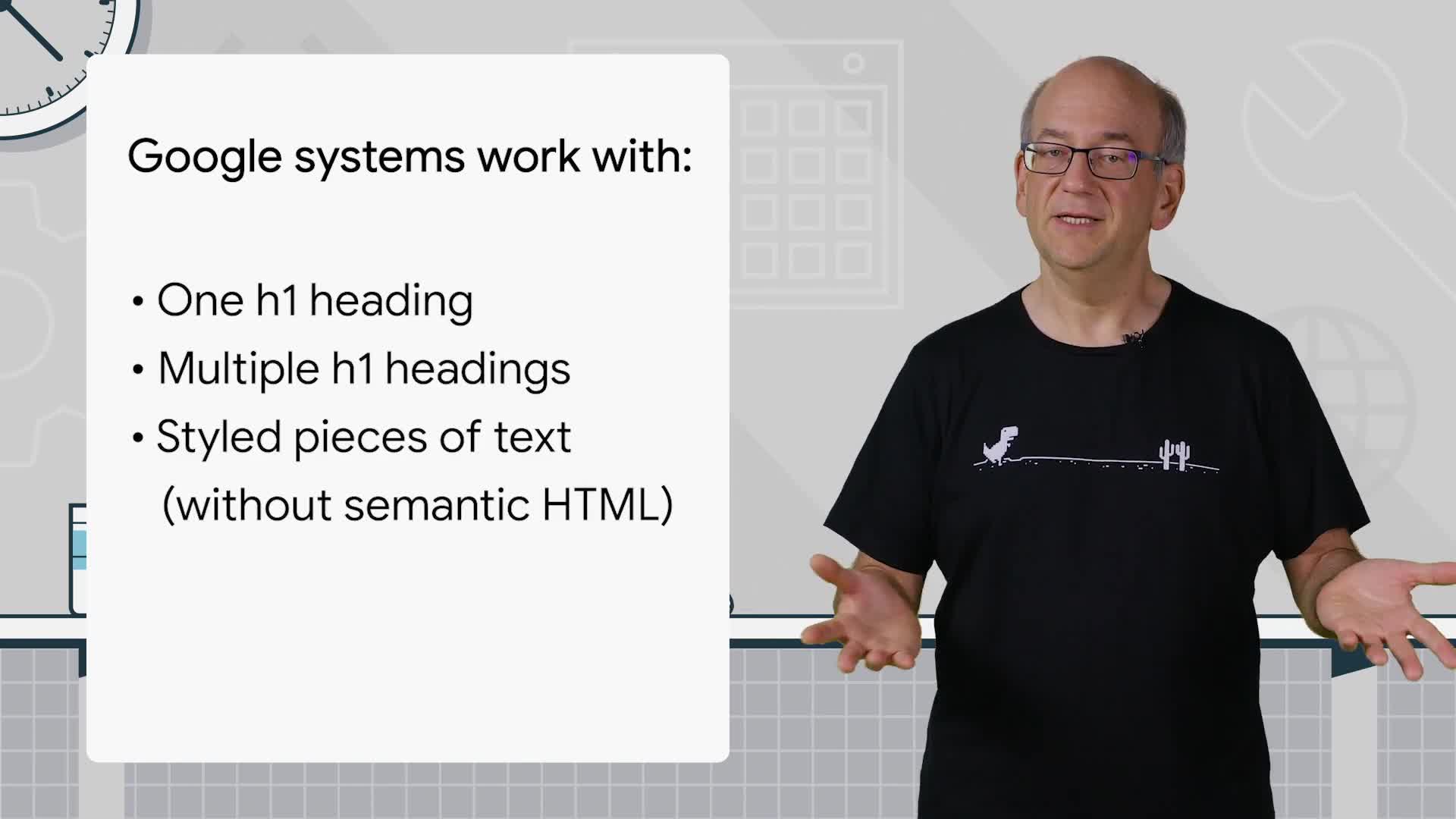 
On October 3, Webmaster Trends Analyst John Mueller delivered an edition of #AskGoogleWebmasters describing how Google approaches H1 headings with regards to ranking. The explanation caused a bit of a stir.

“Our systems aren’t too picky and we’ll try to work with the HTML as we find it — be it one H1 heading, multiple H1 headings or just styled pieces of text without semantic HTML at all,” Mueller said.

In other words, Mueller is saying Google’s systems don’t have to rely on specific headings structure to indicate the main focus of content on the page.

Mueller’s answer would appear to counter a longstanding “best practice” to use and optimize a single H1 and subsequent headings on a page. This is even reflected in the weighting of +2 that headings were given in our own most recent Periodic Table of SEO Factors.

“This seems to directly contradict years of SEO advice I’ve been given by all the SEO experts,” Dr. John Grohol, founder of PsychCentral.com, tweeted, expressing a reaction shared by many. Others cited their own experiences of seeing how H1 implementations can affect organic visibility.

How headings are designed to be used

The hierarchy of headings communicates what the content on a page is about as well as how ideas are grouped, making it easy for users to navigate the page. Applying multiple H1s or skipping headings altogether can create a muddled page structure and make a page harder to read.

Accessibility is also a significant reason to use headings. A point made even more salient now that the courts have ruled that websites fall under the Americans with Disabilities Act.

“Heading markup will allow assistive technologies to present the heading status of text to a user,” the World Wide Web Consortium’s Web Content Accessibility Guidelines (WCAG) explains. “A screen reader can recognize the code and announce the text as a heading with its level, beep or provide some other auditory indicator. Screen readers are also able to navigate heading markup which can be an effective way for screen reader users to more quickly find the content of interest. Assistive technologies that alter the authored visual display will also be able to provide an appropriate alternate visual display for headings that can be identified by heading markup.”

Joost de Valk, of Yoast SEO WordPress plugin, noted that most WordPress themes are designed to have a single H1 heading just for post titles — “not for SEO (although that won’t hurt) but for decent accessibility.”

SEO consultant Alan Bleiweiss pointed to a WebAIM survey that found 69% of screen readers use headings to navigate through a page and 52% find heading levels very useful.

Many SEOs are concerned that Google’s lack of emphasis on accessibility standards, including rel=prev/next, may disincentive site owners to implement them, potentially making content harder to understand for users who depend on screen-reading technology, such as the visually impaired. Do that at your own risk.

“It is naive to think that Google completely ignores the H1 tag,” Hamlet Batista, CEO and founder of RankSense, told Search Engine Land.

“I’ve seen H1s used in place of title tags in the SERPs. So, it is a good idea to make the H1 the key topic of the page; in case this happens, you have a reasonably good headline,” Batista said, adding that having multiple H1s may provide less control of what text could appear in the search results if the H1 is used instead of the title.

In the comment above, which was left on Search Engine Roundtable’s coverage of the announcement, the commenter attributes the performance decline to an error that resulted in removal of H1s from his content.

You should still use proper headings

All John Mueller is saying is that Google can usually figure out what’s important on a page even when you’re not using headings or heading hierarchies. “It’s not a secret ranking push,” Mueller added in a . “A script sees the page, you’re highlighting some things as ‘important parts,’ so often we can use that a bit more relative to the rest. If you highlight nothing/everything, we’ll try to figure it out.”

As Mueller said at the end of the #AskGoogleWebmasters video, “When thinking about this topic, SEO shouldn’t be your primary objective. Instead, think about your users: if you have ways of making your content accessible to them, be it by using multiple H1 headings or other standard HTML constructs, then that’s not going to get in the way of your SEO efforts.”

George Nguyen is an Associate Editor at Third Door Media. His background is in content marketing, journalism, and storytelling.
DontGoogleH1sHeresMatterPPCrankings