As Google has come under fire for search suggestions like “are women evil” or actual results questioning whether The Holocaust happened, those who oversee its search engine aren’t ignoring the issue. They’re just taking time to figure out the best and most comprehensive response.

This week, I met with several engineers and executives involved with Google’s search results, including Ben Gomes, vice president of core search. There’s no question that Google has heard the concerns. There’s no question those within Google itself are disturbed by what’s being raised. But the desire is to find solutions that are generally defensible, rooted in policy and which can be implemented through algorithms, as much as possible.

In a statement Google gave me after our meeting, it said:

The goal of search is to provide the most relevant and useful results for our users. Clearly, we don’t always get it right, but we continually work to improve our algorithms. This is a really challenging problem, and something we’re thinking deeply about in terms of how we can do a better job. Search is a reflection of the content that exists on the web. The fact that hate sites appear in Search results in no way means that Google endorses these views.

Google won’t go on the record about what it may do, largely because it’s not even certain yet what that will be, only that it knows it needs to do something. It has two chief challenges.

The first is dealing with search suggestions, also called “autocomplete.” These are suggestions that appear as people are typing in the search box. The feature is designed to speed up the searching process, especially for those on mobile devices, where typing can be difficult. Autocomplete allows for typing a few characters and having a list of popular searches appear in response.

However, because the suggestions are drawn from actual popular searches that people do, they can also reveal ugly truths about society. For example, some ask why Chinese people are rude:

Some also ask if white people are human:

Personally, I’ve long been for filtering out as much of the negative from such suggestions as possible. My concern is that autosuggest can present things that are often stereotypes or not necessarily true to those who neither knew such things nor wanted to know them. It can “detour” searchers into areas they didn’t want to go into. Worse, as is emerging, some of the actual results that appear for these type of search suggestions might not provide balance.

What Google will do here is uncertain, but it’s definitely an area that’s being explored for change.

Whatever Google implements won’t be perfect. That’s why it will be important, in my opinion, that Google also develops an easy mechanism to report objectionable suggestions that get through and a policy that’s flexible and sensible enough to allow for manual removals of what the algorithm fails to catch.

Right now, you have to know where the autocomplete help page is to get to the report form, where it’s entirely unclear why Google might remove something other than if it’s considered hate speech or sexually explicit or abusive content. More clarity, reasons and transparency are needed.

While suggested searches should be better filtered, I also hope that Google makes it easier to research some of these things through Google Trends. It’s a different environment there, where people are deliberately seeking to see what search reveals about society. Sadly, search reveals some ugly things. But understanding that there are real people — in significant numbers — who may hold or be curious about stereotypes is one of the best ways to understand where education needs to happen.

What’s suggested is one thing, but it’s really the results that you get which matter. For example, as was demonstrated this week, Google came under fire for having a Holocaust-denial page listed first in its results for a search on “did the holocaust happen,” as shown in this example from the Guardian, which first wrote about it: 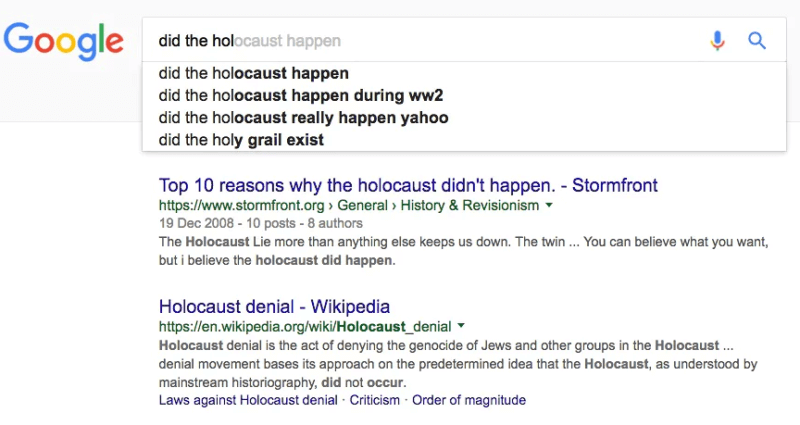 How to deal with this type of result? There have been many knee-jerk calls to remove it simply because it’s not factually-correct. But a one-off removal of the page wouldn’t solve the problem for other searches and with other sites.

It also poses another challenge. If the policy is that you just remove things that aren’t based in fact, much of the web can become vulnerable to censorship from Google. For example, would you have to remove major religious organizations because these groups are based on unprovable faith — the very essence for most of them — rather than demonstrable fact?

Google needs some type of policy to deal with the type of “post-truth world” that is of a growing concern to so many. One thought of mine — and of others that I’ve seen voiced — is that potentially, it could partner with third-party organizations to develop a list of particular sites that should be flagged or filtered, such as Facebook announced this week that it would do to combat fake news.

Google does already flag fact-checking sites within Google News, something it put into place last month. Filtering would be the opposite. It would penalize or lessen the chance of sites that seem to be pushing fake news from appearing for popular searches.

As with filtering search suggestions, no system Google puts into place would be perfect. That’s why, again, having a good policy that can handle what gets past any algorithmic change would be important.

Another thought is that Google might find a way to do a better job providing details about sites that are listed. Right now, you’re given a title, description and URL. But those with long memories can recall when Google used to provide a “PageRank” score next to listings, a way it was trying to indicate how authoritative a site might be.

Bringing back PageRank scores isn’t the answer, but there might be another way that Google could indicate the general authority of a site or the “neighborhood” of sites that it’s associated with.

Finally, more transparency would be helpful in terms of ranking. This is always a touchy subject with Google, because it fears giving too much information away helps people manipulate its search engine.

However, it’s bizarre that something like that Holocaust denial post is showing tops in Google. It has no great number of links pointing at it, according to a Moz tool I used. The Wikipedia page below it should carry far more authority.

Maybe Google is indeed rewarding clickthrough rates as some speculate. IE, the type of person who searches for “did the holocaust happen” might be more likely to click on sites that suggest it did not, if that was already their preconception — and thus the results start to become one-sided for certain searches, if you reward those that get the most clicks.

Google has been steadfast that it does not use clickthrough rates in the way described above, by the way. But the mystery remains. We can’t even see backlinks via Google itself, now that the specific command for that, endangered earlier this year, seems finally dead. We have to depend on third-party tools, instead. Overall, it makes it difficult for external experts to help Google diagnose its own search ranking sicknesses.

I think it’s important to note that the issue being raised isn’t just happening with Google. For example, Bing has drawn praise when some searches on Google bring up unsavory results while Bing is more balanced. And personally, I’ve felt Bing does seem to deal with the problem better, when I’ve done some comparative searching recently. It appears to have a more robust algorithm for these types of searches, including rewarding Wikipedia more.

Select the second suggestion on whether it was justified, and the first result is from an online debate site finding that it was:

The second listing, by the way, is not justifying it. It sounds like that, but it’s actually an examination of those who do.

Similarly, at the often-praised Duck Duck Go — which itself largely depends on the search results from Bing — a search for “was the holocaust” suggests “was the holocaust real” and “was the holocaust a hoax.” Select the hoax suggestion, and the top result is from a denial site (and most of the results are from similar denial places):

But Google is reacting

Search is hard. For all the talk of machine learning magic, machines still can’t actually know fact from fiction. They learn from humans. And humans can be tricky. It’s even worse when you’re in situations where matters are up for debate.

Google’s taking the brunt of this issue because, in the end, it’s the leading search engine. It’s also continuing to take the brunt because it’s easy to cherry-pick searches that aren’t actually done by that many people to come up with a fresh angle for attack.

It’s also easy to suggest that this is somehow something new (we don’t know this at all, nor has any proof been shown) or that it’s only being done by the right-wing manipulation (it’s not) because both themes feed into a growing concern about fake news.

Make no mistake. It’s good that the issue has been brought to light, regardless of how broadly it’s actually impacted the general searching public. The Guardian’s original article two weeks ago, highlighting the “are women evil” search and other problems is well worth reading and played a good and important role in elevating concern here.

It’s also important for Google to act promptly to correct these issues, in the way that it has tackled other problems in search such as with content farms. It has let autocomplete issues fester for years. It doesn’t get yet more years to deal with that. Within a few weeks, at most a few months, we really need to see visible and meaningful change. That’s enough time for a solution to be done with thought and care.

I’ll close with a last thought. One of the best ways to combat these type of results is with good information. It likely doesn’t occur to some good authorities to write content about why the Holocaust really did happen or why some stereotype isn’t true, phrased in the way that someone who has doubts or misbeliefs might search.

Google can and should make changes. But as I said earlier, these search suggestions also shed light on the type of education that needs to happen and the language in which it may need to be expressed. Creating that type of content will help Google, Bing and others deal with the problem.

Lastly, if you are debunking fake news and other wild claims, don’t link back to the originating sites. Or if you do, make use of the nofollow attribute. When a reputable site links to a disreputable one directly — without using nofollow — it’s ironically passing along some of its authority that helps the disreputable site rank better in search engines. Don’t do it.