AdWords Scripts are now available in the New AdWords interface, giving users a visual refresh, as well as some new capabilities that make management a bit easier, especially for advertisers with lots of scripts in their accounts.

Here are some of the key changes:

You can find scripts in the three-dot menu, under the Bulk Actions section. If you go there from your MCC account, you’ll find your MCC-level scripts and, if you access the page from within an account, you’ll see the scripts you’ve set up for that account.

Scripts are now available in the new AdWords interface.

Google shows 10 scripts by default, but there’s a new option that lets you see as many as 500 scripts on one page. For heavy script users like me, this is a great addition. The scripts are also now sorted by name, by default. This is different from the old interface where scripts are sorted by “last edit date,” but luckily, all columns are sortable in the new interface so I can easily see my most recent scripts at the top of the page again. 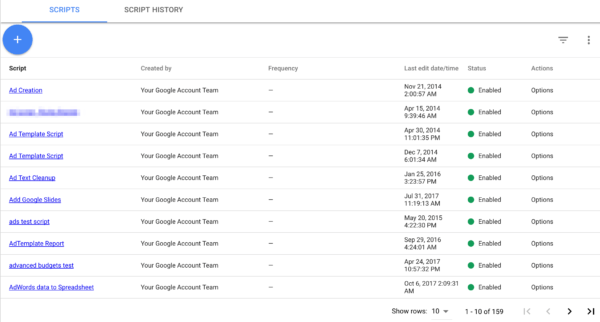 A listing of scripts in the new AdWords interface

While scripts are still limited to running once per hour, there is a change to how the frequency is displayed for scripts that were set up before the launch of the new interface. For those, Google now indicates at what time during the selected hour it will run in the future. 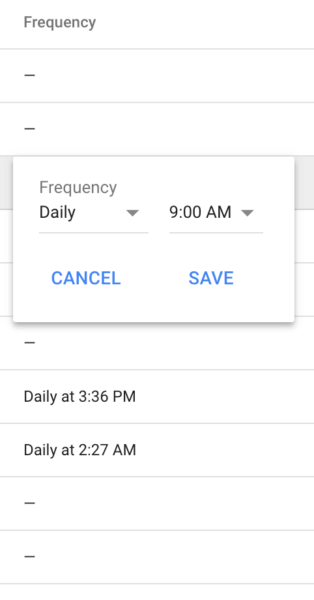 Scripts can be scheduled to run during a particular hour, but some scripts will show a more precise time for when it is supposed to run.

You can now see who created a script.

One of the most exciting additions is a convenient new option under the Actions menu for each script: Duplicate. 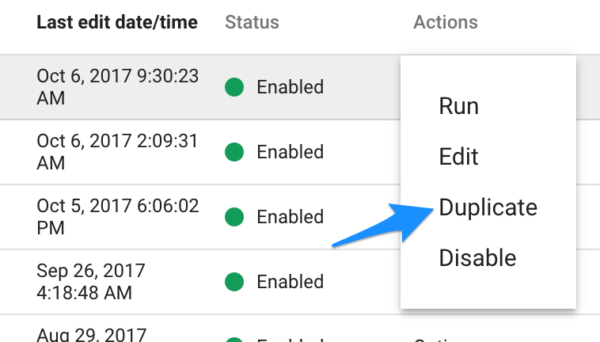 Existing scripts can be duplicated, making it much easier to maintain versions while experimenting with new code changes.

When editing my own scripts, like the ones I post on Search Engine Land or Optmyzr, or when trying a new script I got from someone else, it’s nice to have an easy way to duplicate it. Scripts don’t keep versions, so, if you break it, it’s hard to go back to the old working version. Now I can do my own versioning by making a copy of a script before I start playing with the code.

It’s also easier now to find scripts because Google added filters to the page to let us search for a script’s name or creator.

Filter script settings by name of the script or who created it. 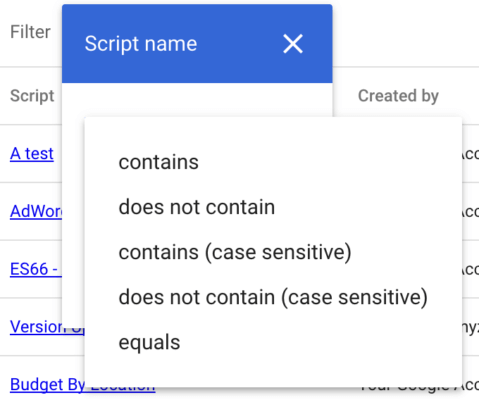 Filters can include advanced operators, making it a very flexible tool to help find the script you’re looking for.

Script history is now on a separate tab from script settings, an improvement over the previous interface, which required us to scroll down past all of the settings before we could see the history. There’s also a date selector on this tab. That, in combination with the ability to see up to 500 script runs per page, makes it a lot easier to determine what scripts are doing in an account.

There is a new column for “Actions,” but it’s not clear what this one is supposed to contain. Perhaps we’ll soon get the ability to undo script changes from here.

Frederick (“Fred”) Vallaeys was one of the first 500 employees at Google where he spent 10 years building AdWords and teaching advertisers how to get the most out of it as the Google AdWords Evangelist.
Today he is the Cofounder of Optmyzr, an AdWords tool company focused on unique data insights, One-Click Optimizations™, advanced reporting to make account management more efficient, and Enhanced Scripts™ for AdWords. He stays up-to-speed with best practices through his work with SalesX, a search marketing agency focused on turning clicks into revenue. He is a frequent guest speaker at events where he inspires organizations to be more innovative and become better online marketers.