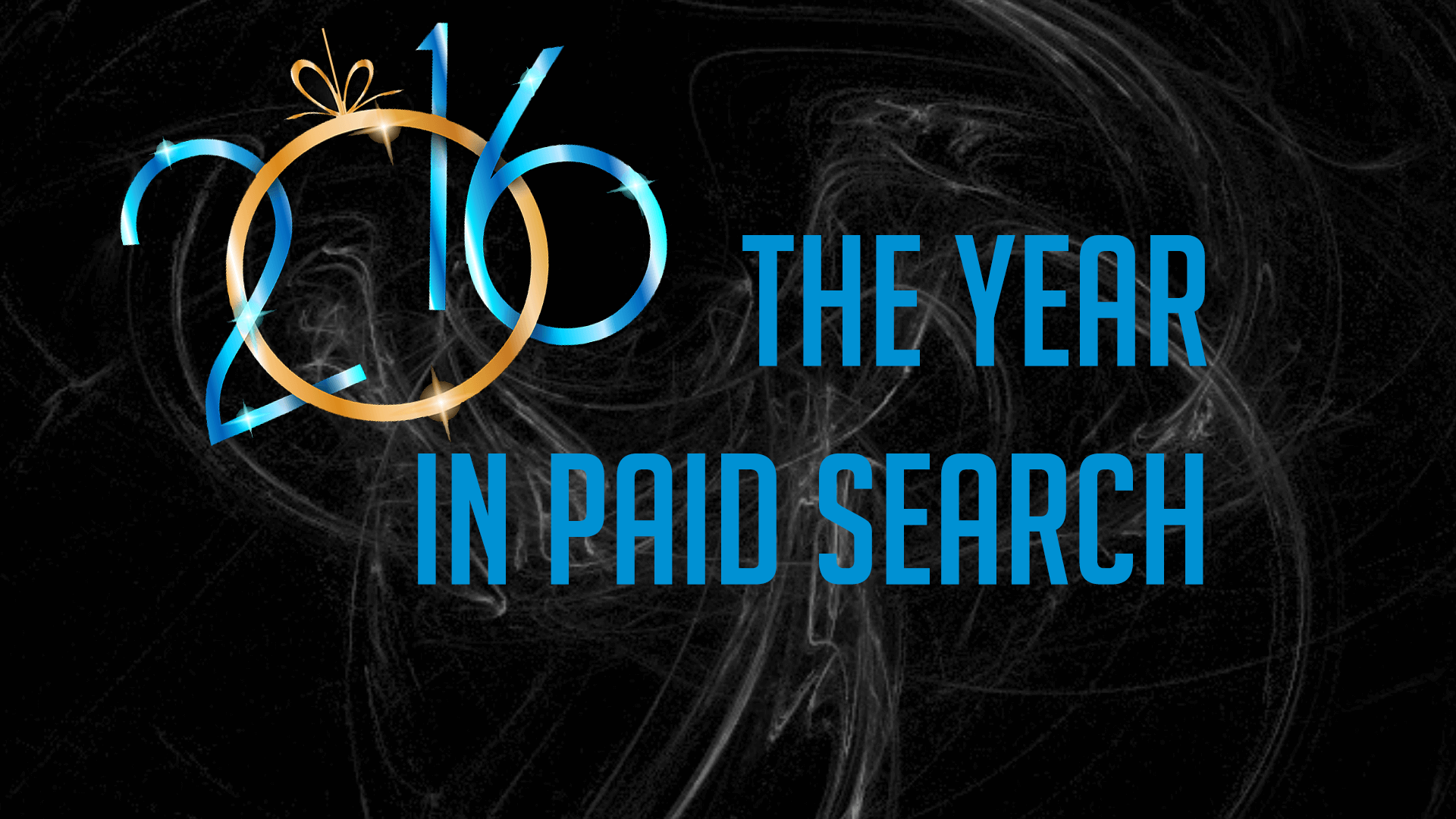 
Aloha, here we are again — coming down from the high of holiday e-commerce, the Q4 scurry of lead gen and the calm before year-end reporting starts churning. Let’s take a breather and look back on all of the changes in PPC that came flying at us in 2016.

First, let’s get one thing out of the way. In last year’s year-end roundup, I said Yahoo might be worth paying attention to in 2016 due to the renegotiated search deal with Microsoft and CEO Marissa Mayer’s stated commitment to mobile search. So long ago. It did seem like Yahoo might just be able to gain steam back then. Now, that steam is gone like the data of over a billion user accounts.

The final adieu to the Yahoo Bing Network came in February, and for many advertisers, that was the last time Yahoo entered their campaign heads. Sure, if you advertise with Bing and/or Google, your ads typically show up on Yahoo, too, but other than the water cooler talk about who was going to buy Yahoo that developed into, “Will Verizon still buy it and at what discount,” Yahoo held little relevance for search marketers in 2016.

So, moving on to all the stuff that made 2016 a giant year in PPC! We’ll start with the biggies that impact most everyone and move to more specialized updates.

There are always changes in paid search, but 2016 were not your garden variety year. There were fundamental updates that will continue to have repercussions in the years ahead. The was a lot less frustration, however, in 2016 than in the last year of major changes — when Google unleashed Enhanced Campaigns in 2013. 2016 can be seen as the year mobile truly took hold as the primary focal point in paid search, with some reports showing mobile now accounts for 60 percent of searches in the US. Desktop results were changed to reflect mobile. That mobile-preferred check box for ads went away, and mobile bids can now be used as a foundation for campaign bidding. Enhanced campaigns did its job.

Google upped its PR finesse in 2016. It announced advertisers would have to rewrite all of their ads at the same time that it announced device bidding is coming back. Desktop and tablet were re-separated for bidding, and it’s now possible to have mobile be the base bid. Maybe you’re not even doing anything differently yet, but knowing you can set a tablet bid adjustment or make a campaign mobile-first whenever you want feels so empowering, right? Well played, Google. Bing, which was never as restrictive with device bidding as Google to begin with, is currently piloting new bid adjustment ranges, but still makes desktop the base bid.

We first reported the biggest change of the year — Expanded Text Ads — was being tested in April. ETAs went live for everyone at the end of July. The new ad format upends how advertisers have written text ads since the inception of AdWords, more than 15 years ago. The transition hasn’t been without its bumps — Google pushed the cutoff for being able to edit and add standard text ads until January 31, 2017, after seeing slower-than-expected adoption of the new longer text ad format. There was the headline truncation kerfuffle, which mostly seems to have been remedied with a narrower font, but for the most part, advertisers have taken the changes in stride, on the promise of better CTRs.

2017 will be the year we really see how ETAs perform. Early results have been mixed, with some advertisers seeing dramatic bumps in click-through rates and others seeing, well, meh. Bing added support for ETAs as well, and rolled them out globally in October for much-welcomed parity between the two platforms in this area.

The ushering in of ETAs was made possible, of course, by the removal of text ads in the right rail on desktop, which also made desktop echo the layout of mobile results. It was quickly pointed out that longer titles and description copy in ETAs also have a way of making text ads look even more like organic listings. And speaking of making ads blend in with their organic surroundings, let’s not forget 2016 was the year of the green ad label. Green replaced the yellow in the ad labels next to the display URLs in text ads, which also happen to be green like their organic counterparts. (Want to see how Google’s color treatment of text ads has changed over the years? Here it is.)

Now for two announcements that generated a ton of interest but essentially had zero impact this year. First, the Google AdWords redesign. Some advertisers do have alpha access, but there are still a lot of elements missing before the new look is ready for prime time. Still, that didn’t tamper interest in some of the very handy visualizations in the new design. We’ll have to wait until 2017 to get the full Material Design treatment that Google Merchant Center and AdSense got this year. Second, Microsoft is buying LinkedIn. The deal hasn’t closed yet, but Microsoft’s Lynne Kjolso told the audience at SMX Advance this year that discussions of advertising scenarios were already happening shortly after the announcement.

With Amazon being Amazon, and Facebook’s Dynamic Product Ads, and even Pinterest’s Promoted Pins, gaining adoption, Google is under pressure to squeeze everything it can from product search and its product listing ads. And squeeze it did this year. Carousels of product listing ads (PLAs) are now showing up in Google Image Search, YouTube and third-party retailer sites.

Google started looking at ways to get more from all those broad product searches, like “cocktail attire,” this year. The most innovative but perhaps least likely to succeed of these is the shop the look format for apparel and home products that pull images from partners such as Curalate and Polyvore (owned by Yahoo, so there you go) and link to a set of product ads based on the looks. The other broad query PLA format called Showcase Ads initially showed off retailer collections. But one recent variation on this featured new and used clothing on outlet-related searches.

Oh, and Purchases on Google — aka the buy button-like feature that lets consumers shop from a PLA on their phones — is ticking along in pilot mode. Ralph Lauren, Ugg and Staples are among the brands that continued to test it this year.

Google took a big step in standardizing product data in Google Shopping by requiring GTINs for brand-name products that are sold by multiple retailers in product feeds.

Another big change for sellers was Google’s announcement that retailers and brands must have at least 150 ratings in the past 12 months for seller ratings to appear in their ads. That was up from just 30.

Local got a shake up this year with the introduction of ads in the local pack, Promoted Places pins in Maps, exposure for local inventory ads in Maps and Knowledge panels, developments in store visits metrics, and pulling Google Maps out of the Search Partners network.

Ads started showing up in the Local Finder, the listings that appear next to the Map after a user clicks on “More places” from the search results, in April, around the same time Maps was moved into general search ad inventory. Later that month, Google started testing a purple “Ad” label on Local Finder ads and a corresponding purple pin on the map on Android and desktop. That didn’t last in the local finder, but the purple labels and pins did roll out in Google Maps.

And the big development in Maps, Promoted Places, has been in testing for a good part of the year. Retailers such as Walgreens, MAC Cosmetics and Starbucks have been testing the ads on Android that feature the brand logo in the pin and can include promotions.

Though still limited to a handful of metro markets in California, another area to keep an eye on in the local space is Google’s Home Services Ads program. This year, HSA opened up to HVAC services and electricians, and the whole program finally rolled out to mobile.

Google’s efforts to connect online campaigns with offline impact continued in 2016. Its store transactions measurement is still in beta, and there weren’t really any announcements around that this year, but Store Visits continued to gain traction in AdWords. Google announced it had measured more than one billion store visits from AdWords in 11 countries as of May (it’s now available in 14 countries). Store Visits also expanded to Display Network campaigns. Finally, Store Visits data became available in distance and location reports in Adwords. (The distance report is an unsung resource for advertisers with physical locations).

Google has been steadily shifting from a focus on intent targeting to audience + intent targeting, thanks to market pressure from social networks Facebook. 2015’s Customer Match was the first big step in this area.

Big news in audience targeting is demographic targeting — age and gender — rolling out, and the ability to target similar audiences in search coming out in beta.

This fall, Google announced it would at last start to support cross-device retargeting. Google’s head of search ads, Jerry Dischler, made several announcements on audience targeting for search at SMX East in October: Cross-device retargeting was extended to Retargeting Lists for Search ads (RSLA), demographic targeting for age and gender in search ads was rolling out of beta, and similar audiences for search is now in open beta. These all add up to big possibilities for refining the way we execute search campaigs in 2017 and beyond.

This year, Google unveiled the Analytics 360 Suite in May. The a la carte premium suite includes the rebranded versions of Google Analytics Premium, tag manager and Adometry attribution tools, as well as a new data management platform, a testing and optimization tool and a reporting and data visualization service. The nice thing is, the freeloaders got gifts, too. A free version of the reporting and visualization platform, Google Data Studio, rolled out early this summer. This fall, a free version of Google Optimize for landing page testing and optimization went into beta (sign up here).

A quick rundown of what happened in extension land this year:

Google added native inventory to the Display Network and introduced a responsive ad format to fill it. The responsive ads can run across the GDN, including in the newly available native ad inventory. Advertisers can convert text ads to responsive ads in Editor now. It looks like more may be in store for responsive ads soon.

Conversions became the king of measurement in AdWords, as Converted Clicks went off to into the sunset this fall.

A whole bunch of weird stuff happened in AdWords Keyword Planner, presumably thanks to bots. And Google added forecasting and trend data for those with active AdWords campaigns.

Here’s something I was excited about when it was first announced, but have yet to do anything with and am jealous of those who have: AdWords Campaign Groups.

Google started shutting down its Compare products in the US and UK early in the year — a big deal to the industries affected (credit cards, auto insurance, mortgages and travel insurance).

In the US, those giant car ads, Model Automotive Ads (just rolls off the tongue), came out of beta on mobile, along with nearby dealer ads.

Christmas came early for Mac users with the release of Bing Ads Editor in June.

And that’s a wrap on 2016. Expect to see the trends we say this year — audiences; attribution, including online-to-offline; mobile; and automation — continuing to influence change in the year ahead.